Don’t be deceived, Hillary Clinton is Barack Obama in a pantsuit

There isn’t a dime’s worth of difference between how Hillary Clinton would govern and how Barack Obama has governed.: 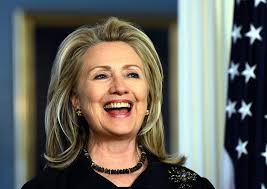 [1]Keep in mind after her tenure as secretary of State was over, Syria is a mess, Russia is expanding after her stupid reset, China is claiming islands off the coast of Japan, and the Israel Palestinian peace process has gone nowhere.: : :

That’s a pathetic résumé without even mentioning the Benghazi terrorists attacks in which she let four Americans die, including our ambassador.:

What Hillary does have though is a fawning media that will pound the message of her being the first woman president until your eyes bleed. That’s all she has and we’ve already lived through a myth sitting in the White House.:  Do you really want to relive that again?: : :