The trouble with the Fluke matter is, we need to get off it and on to other things that are far more important; and, at the same time, we don’t.

On the one hand, the matter is settled. President Obama has been so hugely embarrassed by the whole contraception-mandate thing that His pals on Capitol Hill figured out there was no way of saving Him short of the Winifred Skinner[1] technique: Put some sad sack in front of the cameras and tell a tall tale about the woe and misery involved in this one loser trying to cope with life. Oh, how can this happen in America! We need reform! This is all old ground for us by now, there are “real” problems elsewhere that need solving.

On the other hand, there’s something important taking place that hasn’t received the attention it deserves. The Sandra Fluke thing, with the sl*t issues and the free speech issues removed — and, yes, I’m ready, let’s do that — is revealed as a Winifred Skinner thing. We’ve got these politicians who are supposedly “serving” us, and they’re supposed to have such fine and upstanding character, chosen from the best and brightest among us. And, as respect for the legislative branch in particular, and our government in general, continues to sink like a bowling ball dropped over the Mariana Trench, they continue to put these losers in front of microphones to guilt us into more unaffordable social programs. On Planet Liberal, the Constitution is meaningless, and the only constitution that applies is an unwritten one. It’s got something to do with inventing new rights every now & then, by means of drama.

If anybody calls them on it, they invent more rights for themselves, on the spot, again, by means of drama. Specifically, they should be allowed new influence and powers because their feelings were hurt just now.

If this tactic appealed only to the other sad sacks strewn across the country, it wouldn’t work. Yes, we’re in an idiocracy[2] for the moment, and that means every new year finds us weaker and more pathetic than the year before, which may mean each year there are more sad sacks than there were one year previous. But they’re still in the minority. The problem here, as I see it, is empathy: We’ve got these “moderates” out there who work honestly and hard, and pay their own way, but they want to show some compassion toward those who must live off the efforts of others. They fail to distinguish between those who are indigent by circumstance and those who are indigent by choice. They behold, to use a metaphor I’ve used previously, the local widow and the town drunk. They see only commonalities between the two, and no differences.

They’re entirely decent people, but since they are not part of the solution, they’re part of the problem. Perhaps we should dispense with the diplomacy: They’re suckers. They bought every little cock-and-bull story told to them about Sandra Fluke, by The Left, over the last two weeks. Wolfed it all down, and begging for seconds. Sandra Fluke told truth to power! Georgetown gals need three thousand dollars for their ovarian cyst medication! Ban Rush Limbaugh because he said something legal but offensive!

Remember when the radical Islamists out in New York wanted to build a Victory Mosque near the site of the September 11 attacks and the liberals started calling everyone racists who didn’t want to roll out the red carpet? They said it was all about something called “religious freedom” and claimed to have always held a deep genuflecting respect for the principle. And then demanded that we not chortle at the thought…lest they become offended. Just so adorable! Well, this time the thing they’ve always believed going back to the very beginning, is that anyone who so much as thinks the word “sl*t” should be vaporized on the spot. Yeah, them. The “Sarah Palin Is A C*nt” people. Don’t crack a smile, whatever you do! Choke it down! Wouldn’t want to offend them…

Yeah, it’s a double standard. But let us perceive it for exactly what it is. Wisdom from my Hello Kitty of Blogging account[3]:

The Modern Left does not HAVE a double-standard.

the Modern Left IS a double-standard.

That is their mission, that is their message…so yeah, they said “hey Rush shouldn’t use that word” and they end up embarrassed because, it’s on tape, their guys have been using that word, much more frequently, and other words much, much worse.

If the same opportunity was presented to them a hundred more times, they would have plowed right into the same embarrassment and self-inflicted damage a hundred more times. This was all quite unavoidable. It’s what they are. Special rules for special people, and lowered standards for whoever they define to be victims. It is their primary position and their core value system.

This applies to all issues on which there is significant disagreement between conservatives and liberals, at least all the issues that are not exclusively concerned with building a police/nanny state. The formula is ever-present on issues foreign and domestic. X has endured Y…and because X has endured Y, we have to have Z and, furthermore, you are not allowed to say anything about X that isn’t absolutely flattering. Z is a consolation prize to X, punishment rained down on the head of whoever did Y, or some combination of those two. That is the leftist position. On everything.

They are anti-equal-protection advocates. Across the board. They want special privileges for defined elites. That is the product they are selling. 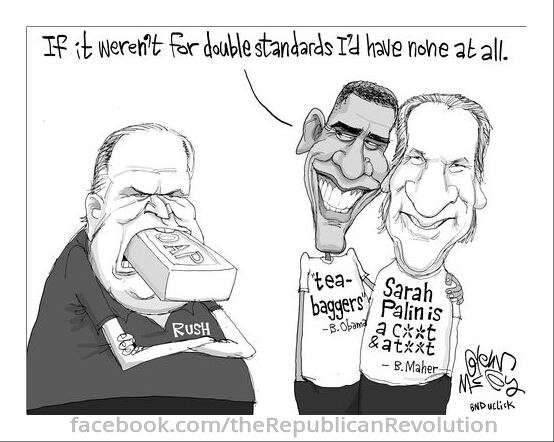 Palestinians aren’t bombing Israelis, they’re just fighting back the only way they know how, after Israelis used American weapons to incinerate their babies.

We took the land away from the Indians, oops Native Americans, so they should have their own fishing seasons.

If we can somehow manage to dredge up some passionate argument against the way you got the evidence, then it never happened and you “must acquit.”

And if we can’t do that, then the poor convicted rapist/murderer guy had a rough childhood and is not to be blamed.

Blacks can use the N-word, whites can’t.

We’ve got to recognize same-sex marriage, because, who are you to tell people who they can’t love?

Women make seventy cents on the dollar compared to men, so now that the marriage is over, he needs to pony up the cash to keep her in the lifestyle to which she has become accustomed.

We need to keep Affirmative Action around, with quotas, for, oh, so-many more years or so…

You can’t build that dam, the snail darter lives there.

Hillary Clinton’s husband messed around on her, so she is eminently qualified for just about everything.

I could keep adding to that list all day…but what’s the point…once the pattern is defined and understood, it is visible in everything they do. And in each case, it is a measurable event that the plane of reality is being abandoned — because, in each case, if someone within the victim class is provably guilty of some transgression, the liberal position is going to consistently be offered that reason and justice must be derailed (simplest example of this would be in the illegal-immigration problem).

This is a significant point, and it is important that more people become fully aware of it. It will affect the outcome of the election this year. Since around the time of Bill Clinton’s victory twenty years ago, The Left has enjoyed easy victory by peddling their nonsense to the moderates I mentioned above — the charitable, kind-hearted, hardworking moderates. Who are suckers. Because those suckers cannot tell the widow apart from the town drunk, and make no effort or achievement toward understanding there are people walking around determined to live off of the sweat of others. People who think only idiots work hard. And why shouldn’t those town-drunks think such a thing, if their lives have been devoted to suckering the sucker moderates — and it has always worked?

The passionate leftist approaches the sucker moderate and recites the formula: X has endured Y, therefore we must have Z. The sucker-moderate decides it the way he decides everything else: By finding whatever can be perceived to be the most “extreme” position on the issue, and rejecting it with great zeal, and great visibility, almost ceremoniously: I denounce that! But they select that most-extreme position emotionally and not logically. Because, logically, “Rush Limbaugh should be taken off the air” would be found undesirably extremist, but somehow these overly-emotional sucker-moderates settle on “Sandra Fluke can pay for her own personal items” as the extremist ethos that must be expunged from our delicate societal sensibilities.

The paradox is this — and, this is why The Left is just as ready as anybody else, to stop talking about Sandra Fluke. They don’t want what follows, to sink in. They don’t want the sucker-moderates to become aware of it. It’s unaffordable, from their perspective and position; this would give the whole game away.

The truth is, you cannot buy into “X endured Y and so we must have Z” without surrendering your believable credentials as a moderate. There is nothing to limit the Z. One of the clarion calls used by The Left in the Fluke debacle has been: “Nobody has said she wants the government to pay for her contraceptives, she just wants her insurance to cover it!” The truth is: Nobody has said that and nobody needs to. Granting her victory in the argument she’s really trying to make here, there’s nothing stopping that next step, is there? The whole testimony was all about how unaffordable it is, for any ordinary Georgetown student, to take on this particular expense all by her poor hapless helpless self. That is the point she was seeking to make.

Here, as is the case with all other liberal positions on the issues — there is nothing to limit the Z. They are inherently extremist positions. You are not able to say anything negative about X; you cannot even think things about X that are less than flattering; therefore, it is not logical to expect any limits should be applied to Z. It is ever-expanding. Always one Capitol Hill testimony, or Wall Street protest, away from the next event of expansion.

To the sucker-moderates, a week ago this was a simple issue: Rush Limbaugh called someone a sl*t, do we sucker-moderates like that word? No, that’s an easy call, so…yes, he should apologize, and what a terrible person he is. That makes Fluke an angel, along with everyone supporting her, they’re all wonderful people. But now that they’ve had a chance to mull it over awhile, The Left is scrambling for a distraction, which is rather surreal when you ponder that Sandra Fluke was a manufactured distraction from something else, herself, in the first place. The sucker-moderates are starting to see the hypocrisy laid bare and it looks ugly. See, they only want to side with the leftists; they don’t want to admit that they’re becoming converted leftists themselves, they’ll never tolerate that. Ever. Paraphrasing Upton Sinclair, they’ll buy into the system but they’ll never buy the label.

And, they’re starting to become aware that the check they’re being asked to write, is a blank one.

You know how bad this situation really is for The Left? The sucker-moderates are starting to wake up to the fact that, deciding public policy issues according to things like emotion, and sympathy for only a few of the impacted parties within the equation, is not only unfair but unrealistic. They are forming a new awareness that such a situation is encumbered by Herbert Stein’s Law[4]: Whatever can’t last forever, won’t.

That particular awareness could be fairly described as the very definition of being a conservative!

Cross-posted at House of Eratosthenes[5].