When my son was a baby it was the biggest temptation to snuggle with him at bedtime because it’s the most natural: desire to feed baby in bed while you sleep.:  Last year Nathan Savage made the biggest mistake of his life when he put his hungry crying baby in bed with him while he was intoxicated.[1] 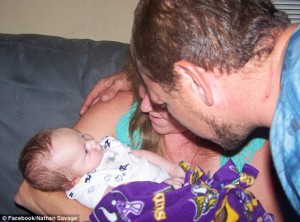 A 30-year-old Minneapolis man faces charges after allegedly suffocating his infant son after falling asleep and rolling on top of him, after a night of drinking. Nathan Savage from Eagan, was charged with manslaughter and child neglect in the death of his two-month-old son Nolan Sikich on October 19th. According to the charges, Savage, his fiancee and friends had been drinking for the couple’s anniversary.

Prosecutors say Nolan was crying so Savage gave him a bottle and took him to bed with him, laying the infant’s head on his chest. The next morning he awoke at approximately 5:55 a.m. to the child’s mother shaking him and frantically asking where the child was, Savage said that was when he discovered he had been laying on top of the infant. Police were called to the home of 30-year-old Nathan Scott Savage just before 6 a.m. on Oct. 19 and were met by the child’s mother, who was crying and screaming, ‘How could you have done this to our child?’

By the time officers arrived, firefighters were already on scene trying to resuscitate baby Nolan. They saw Savage’s fiancee hitting him while screaming: ‘You killed him. What did you do?’ According to the criminal complaint, the police who were interviewing Savage detected a strong odor of alcohol, and he admitted to police that he had been drinking the evening before. Savage told police he laid the boy down in the master bed sometime between 10 p.m. and midnight the night before, and the boy’s mother eventually joined the same bed.

The medical examiner ruled the boy died from ‘asphyxia due to probable overlay’ and said the death accidental. Prosecutors say the case is an example of why parents should avoid sleeping with newborns.

Savage is held on a $50,000 bail no conditions until May 27th. I think this is all excessive punishment. To be honest, I think this man has suffered the highest penalty for his crime and will pay every day when he wakes up, remembering that his carelessness killed his son.

Also,
Captured: Two men that Carjack and Rob a Pregnant Woman in LABOR at Gunpoint[3]