Most of the time, car accidents are just accidents with no malicious intent — and while that may not be of much comfort to the family of a loved one who was killed in a car accident, at least they can rest assured that the other person is truly sorry and not, say, posting pictures of the car they smashed into with smiley faces attached to them. That’s what the family of one teenaged boy is having to grapple with, as Michael Vanwagner killed their son in a car accident and laughed about it on social media. 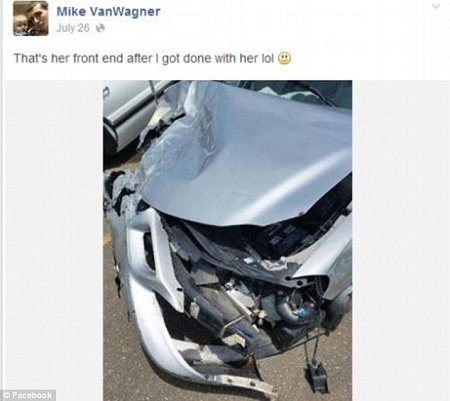 An unlicensed drunk driver who killed a 16-year-old boy in a horror crash last week posted a picture of his totaled vehicle with a smiley face on Facebook, just days after the tragic accident.

Michael J. Vanwagner, 24, of Coon Rapids, caused not one but two crashes on July 22 along Hwy. 252 in Brooklyn Park, Minnesota, according to the State Patrol.

After fleeing the first, the 24-year-old ran into Jason McCarthy’s car moments later, authorities said. The teen was rushed to North Memorial Medical Center where he clung to life for days before dying on Tuesday.

On the Saturday before McCarthy died, Vanwagner posted the insensitive photo of his car on his Facebook page with the caption ‘That’s her front end after I got done with her lol.’

Under a second photo, he commented: ‘I’m all good slept a day in the hospital then came home and did yard work lol.’

On Wednesday, he acknowledged posting the picture but said he didn’t even know he hit somebody.

‘I just thought I hit something,’ he told the Star Tribune.

He caused not one, but two car accidents and wants to claim that he didn’t even realize he had done it? Yeah, nice try, buddy. Meanwhile, the little ray of sunshine also has previous convictions for making terrorist threats, was driving on a revoked license, and was also drunk. Sounds like this loser needs to be locked up, and we need to lose the key.