On her way home from work Sherri Wilkins neglected to realize that she had hit a man before dragging him 2 milte. Understandable mistake I guess if the man hadn’t been impaled into her front windshield.[1] 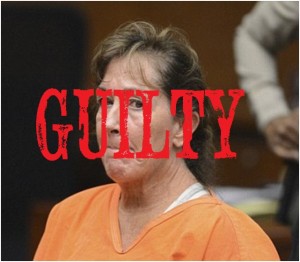 A substance-abuse counselor who drove 2 miles through a Los Angeles suburb with a dying man on her windshield was convicted Tuesday of second-degree murder, drunken driving and hit-and-run charges. Sherry Lynn Wilkins showed no response as the Superior Court jury returned with its verdict. Wilkins’ blood-alcohol level was nearly twice the legal limit for driving when she struck 31-year-old Phillip Moreno in November 2012 in suburban Torrance, prosecutors said.

Deputy District Attorney John Harlan told jurors that after Wilkins hit Moreno, she ‘drove him closer to his death.’

Harlan said the force of the crash punched a hole in the passenger side of Wilkins’ window and Moreno lost his shoes and pants, but still she didn’t stop to render aid or call 911. It wasn’t until passing motorists noticed the bizarre scene that they were able to swarm Wilkins’ car at a traffic light and keep her there until police arrived.

Wilkins was leaving the center on the night of the crash.:  She told the court Mr Moreno seemed to fly onto her car in the 2012 incident in Torrance, but the events remained a surreal blur.

‘It was a flash, ‘Wilkins said. ‘I pretty much felt him landing on my window. To me, it felt like he came from the sky.’ Asked by her attorney, Nan Whitfield, how she felt in that moment, she said, ‘Very confused, like it wasn’t real. It took me a while to figure out there was a body on the windshield.’

On cross-examination, Deputy District Attorney John Harlan asked if Wilkins thought that night she should call her husband to pick her up since she had been drinking.

‘No,’ she said. ‘I wasn’t drunk.’ Asked what she was thinking, Wilkins said, ‘I was thinking I’d better hurry up and get home before the effects hit me.’ Asked about her lack of response afterward, she said, ‘I was freaking out. It was not like I knew what was happening … I still can’t believe what happened.’

Wilkins faces a maximum sentence of 45 years to life.

This woman can argue all she wants that she wasn’t “drunk” but she did admit noticing a man falling from the sky onto her car and neglected to stop to see what happened. Whether she was intoxicated or just plain stupid she deserves every year of prison she serves if only to keep us pedestrians safe from that kind of stupidity.

Also,
Man murders his pregnant girlfriend’s child by slipping her an abortion pill