Early Look at the Convention Stage 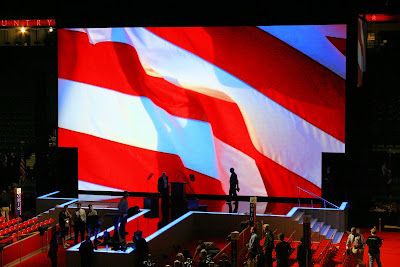 I had the opportunity this morning to get an early look at the stage being set up for McCain’s acceptance speech as the RNC Presidential Nominee. Below are more details regarding the design of the stage and how it reflects the personality of the future President of the United States:

SAINT PAUL, Minn. – Today, the 2008 Republican National Convention unveiled the podium from which John McCain will accept the Republican Party’s nomination to be the next president of the United States.

The podium used for the first three nights of the convention was modified to enable John McCain to deliver his acceptance speech from the center of the Xcel Energy Center. The new podium is a reflection of the town-hall style that has been a hallmark of McCain’s campaign. In the new forum, he will be surrounded by the delegates that nominated him the night before.

The new podium was constructed by removing the front corner sections of the existing platform and extending its midsection by 30 feet. The extension will be eight feet wide. Near the conclusion of tonight’s program, Sen. McCain will address the convention from a lectern positioned near the end of this newly-constructed extension. To accommodate the modified platform, delegates from the state of Ohio will be re-seated on either side.