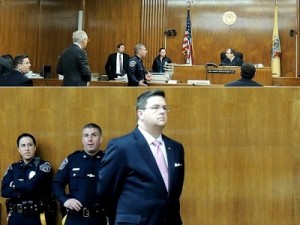 A former Fox News reporter has been convicted of sexually assaulting a four-year-old girl at his New Jersey home in 2009 and 2010. Charles Leaf, 43, was also found guilty of possession of child pornography, despite his father-in-law flying in from Poland to testify that the images found on Leaf’s computer were his.

The guilty verdict came despite the girl, now eight, testifying in a New Jersey court last month that Leaf never touched her and that her nanny Weronika Karwowska forced her to lie about being molested. The girl also claimed that the babysitter threatened her brother and made the children clean the house top to bottom. ‘Weronika told me to say those things,’ she told the court according to the Cliffview Pilot. The accusations first arose in October 2010 when prosecutors said the girl had told Ms. Karwowska that she had been touched by Leaf. She had told the nanny in detail that Leaf had touched her in her private parts and said Leaf told her not to tell anyone, according to prosecutors. Ms. Karwowska contacted a family friend who then contacted authorities.

Leaf was arrested on October 7, 2010, after the girl told investigators during an interview that he engaged in sexual acts with her. The former investigative reporter was freed on $270,000 bail, but will now remain in custody until his sentencing on June 6. Leaf has maintained he is innocent throughout the trial and earlier rejected a plea deal which would have seen him jailed for eight years.

However, the sister said she wanted him ‘fried’, calling Leaf a ‘sick, sociopath paedophile.’ Susan Gaudet, 56, said her brother has been surrounded by allegations of sexual abuse for decades. ‘I want my brother fried,’ Ms. Gaudet told New York Daily News. ‘He needs to be locked away. It’s been 30 years of heartache and drama and trauma for our family and he needs to pay.’

Mr. Leaf, an Emmy Award-winning investigative reporter for Fox 5 New York, shouted to his wife to ‘tell the kids I love them,’ as he was taken into custody, the Cliffview Pilot reported. Mr. Leaf was found guilty of aggravated sexual assault, sexual assault, child endangerment, possession of child pornography and tampering with evidence, after two days of jury deliberations.

It amazes me to hear of high profile people who commit their terrible crimes and then think they are immune: of punishment. If Leaf is indeed guilty, then whoever fell for his bribery or blackmail to cover his trail should be ashamed of themselves for contributing to the disintegration of societal integrity.

Also,
Harvard Feminist Says the Doctrine of Academic Freedom Should Be Abolished Because It Fosters “Racism, Sexism, And Heterosexism”…[2]