It used to be said that every day Congress was in session, you lost a little more of your liberty. : Today, Congress doesn’t even need to be convened, because government can take your liberty without a vote being cast. : They do it through regulations, essentially laws that don’t have to go through the process. : The EPA is one of the worst offenders, and they’re doing it again:[1]

Members of the Small Business Committee in the House of Representatives urged the Environmental Protection Agency to go back to the drawing board on a proposed rule aimed at clarifying bodies of water that fall under the Clean Water Act.

In March, the EPA and the U.S. Army Corps of Engineers proposed a rule to define what “waters of the United States” fall under federal jurisdiction. The rule would include smaller bodies of water including streams, riverbanks, wetlands and floodplains that may have access to larger bodies of water.

Republican lawmakers have opposed the rule since its inception, saying the EPA down-played the regulatory and economic impact on small businesses and was too broad defining what waters could be regulated.

Rep. Scott Tipton, R-Cortez, told the committee the proposed rule is “the greatest water grab that we have seen by the federal government in the United States.”

Jack Field, a cattle rancher with 120 cattle from Washington state, spoke at the hearing and said the rule has “the potential to negatively impact every aspect” of his business.

“It sounds to me once that drop falls out of the sky it’s under the EPA’s jurisdiction,” Field told Tipton when asked if he could identify what waters are covered in the rule. 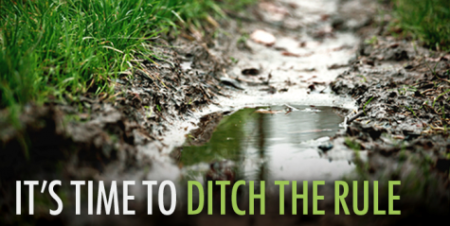 Tipton isn’t the only one calling out the EPA. : Rep. Sam Graves[3], the chair of the Small Business Committee is as well:

U.S. Representative Sam Graves (MO-06), House Small Business Committee Chairman,wrote: to Environmental Protection Agency (EPA) Administrator Gina McCarthy and Assistant Secretary of the Army Jo-Ellen Darcy to urge withdrawal of the recently proposed “Waters of the United States” rule. The rule, as drafted, would result in an unprecedented jurisdictional expansion of the Clean Water Act (CWA), subjecting thousands of streams, ditches and other small waters to federal permitting and other requirements. Congressman Graves, in addition to several members of the Small Business Committee, is particularly concerned that the regulation, which lacks clarity, will impose unnecessary burdens on farmers and small businesses.

“We are concerned that the proposed rule could have a significant economic impact on small businesses, yet the agencies have not assessed those consequences as required by [the law],” Graves stated in the letter. “We believe the agencies should withdraw the proposed rule and conduct the required small business outreach and analysis before proceeding with the rulemaking.”

Graves urged that the EPA and Corps of Engineers to withdraw the rule and comply fully with their obligations under the Regulatory Flexibility Act (RFA) before proceeding with the rulemaking.: The RFA requires EPA to conduct small business advocacy review panels to get input from affected small businesses before proposing a rule.: Furthermore, the RFA requires all agencies to assess the economic impacts of their rules on small businesses.

There’s a line in there that needs attention. : “subjecting thousands of streams, ditches and other small waters to federal permitting and other requirements.”

That’s right. They want to control the water in your ditch, even if it just appears there after a rain:[4]

Water rarely flows in one of the streambeds – it really seems to be little more than a small ditch – that Dean Lemke points out to a visitor on his 800-acre farm in Dows, Iowa.

“I wouldn’t even call it a stream,” he said. “There is only water flow in it when it rains.”

Mr. Lemke is a former Iowa state government official who supervised water-quality programs. He is also a fifth-generation farmer who grows corn and soybeans on his acreage, about 75 miles north of Des Moines, and he has never worried that the government would be concerned about that small ditch.

But that may soon change.

The Environmental Protection Agency is set to issue regulations that farmers like Mr. Lemke say may require them to get permits for work for which they have long been exempt. The E.P.A. says the new rules are needed to clarify which bodies of water it must oversee under the federal Clean Water Act, an issue of jurisdiction that the agency says has been muddled by recent court rulings. Opponents say the rules are a power grab that could stifle economic growth and intrude on property owners’ rights.

Power grab? Yeah, that’s a good name for this.