Now this is hilarious[1]: 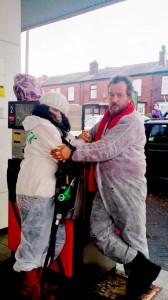 On Monday, four members of an anti-fracking group wound up in jail for using bicycle locks and glue to fasten themselves to gas pumps at a petrol station in Great Lever, England. The group sacrificed themselves in order to protest the hydraulic fracking activities of Total, a French petroleum company.

But, to their embarrassment, the group sacrificed themselves to the wrong petrol station, which was no longer owned by Total. The petrol station was owned by Certas Energy, who neglected to take down the signs after buying the station.

The petrol station’s manager, Reezwan Patel commented that some protesters were peaceful, but that those who shackled themselves to the pumps “were stupid and have cost us a lot of money.” He added that, “We had to close for six hours, so with the loss of customers and the damage to the pumps, it could be a couple of thousand pounds we have lost.”

Not only do they look stupid, but their stunt cost the business owners a pile of money, money that could go towards a families dinner table.