Eric Holder Lied Under Oath In Front Of Congress

The people in the Obama Administration have gotten a free ride for so long that they apparently believe they can get away with anything. That may be the only thing that explains Eric Holder doing something as stupid as this[1]. 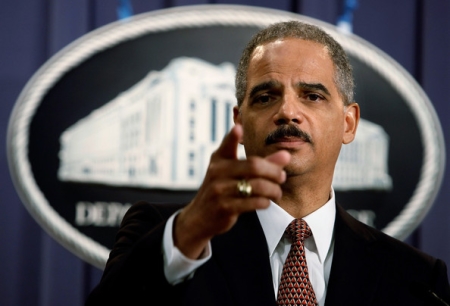 This is what Holder told Congress:

Attorney General Eric Holder signed off on a controversial search warrant that identified Fox News reporter James Rosen as a “possible co-conspirator” in violations of the Espionage Act and authorized seizure of his private emails, a law enforcement official told NBC News on Thursday.

The disclosure of the attorney general’s role came as President Barack Obama, in a major speech on his counterterrorism policy, said Holder had agreed to review Justice Department guidelines governing investigations that involve journalists.

If this information at NBC News is accurate then Eric Holder lied to the Judiciary Committee last week under oath.

Indeed, if it turns out that this is just as it appears with Holder in front of Congress under oath, he will likely end up resigning in disgrace. Given how Obama works, it wouldn’t exactly be a shocker if he shoved him under the wheels of the bus personally. After all, any man who will backstab his own grandmother to protect Jeremiah Wright isn’t going to put his neck on the line to save Eric Holder. Of course, his grandmother probably wouldn’t go on the talk show circuit to tell the world what a megalomaniac her grandson is while Eric Holder might do just that. That’s what makes it so difficult to fire people even when they do a horrible job. They immediately feel compelled to protect their reputation by trashing you, the cable news circuit is eager to hear from them and they can become an even bigger headache down the line.

Yet and still, Holder should have been fired several times over by now and this could very well be the final straw that metes out a little justice to the guy ruining the Department of Justice.