Here’s something to amuse you on a largely slow news weekend — CNN had a roundtable discussion asking if Putin is “bullying” President Obama.

Yes, this is officially where we are[2] now. Soft power, smart power, diplomacy. All of it has come down to one of the propaganda newscasts for a world leader whose power extends no farther than swatting a fly asking if Putin is a big mean bully.

And of course he is. There’s only one answer. Someone from CNN needs to give Obama a big hug and send him to a special school that will enhance his inflated self-esteem even further while freeing him from any and all consequences.

Tell him to forget about Ukraine, Syria, the South China Sea, Egypt and everything else. And then have his celeb pals make some videos for him telling him that it gets better.

Imagine you’re a backroom boffin in Vladimir Putin’s Russia assigned to monitor all of the news media out of the West that references Russia and your boss. Imagine the chuckle you know Putin’s going to get when you show him the following screen capture[4] from CNN:

“Well, that’s it,” Putin is surely thinking. “It’s hands off the Ukraine, now, lest anyone think that I would bully that nice Barry Obama fella! It’s a good thing Stalin isn’t still alive to see this. I know he’d be ever-so-shocked if he were accused of bullying anyone.”

I have three reactions:

First, CNN did use a somewhat immature word — Putin is perhaps “testing” Obama, or “pushing” Obama, or any number of other words more appropriate to an issue of serious foreign affairs — but I think conservative criticisms of CNN’s word choice ignore that the President now has one of the largest voices in mainstream media actually discussing whether the leader of Russia challenging Obama directory. So the word choice, to me, is less important than what it may indicate about the angle of reporting at CNN.

Second, American media often speaks in terms of involvement in other nations as a matter of ego, bluster, or proving something. Is the President “looking weak,” for example, is a term popular in conservative media, whereas liberals and libertarians tend to argue that we will look “imperialistic” if we commit to action. And while these terms do have value — foreign affairs are more about appearances, diplomatic strengths and weaknesses, and a thousand other things I probably have never heard of, all related to posturing, finding solutions, negotiating, etc. — they are often overused and designed to avoid more serious analyses of what’s going on in the world.

In short, I wonder if CNN’s headline is designed to influence the President to take action over ego and bluster reasons, rather than have a real discussion on the matter and follow the Constitution. If so, that’s very dangerous.

Third, I was on the conservative talk show “The Advocate[5]” yesterday, and the host said President Obama was being weak on Ukraine. He said this was typical of President Obama’s weakness on foreign policy. While this word is popular among conservatives as a description of Obama’s foreign policy (though it so far appears to be accurate), I think it’s an inaccurate one to generally describe this president. Yes, Obama has been “weak,” so to speak, with regards to Russia, and he should have backed the Iranian protesters in 2009, to name but two examples. But he’s also been aggressive in violating the Constitution to go into Libya, sending drones into Yemen and Pakistan, getting involved in Egypt, and in the first two years of his presidency insulting our German, British, and Polish allies. 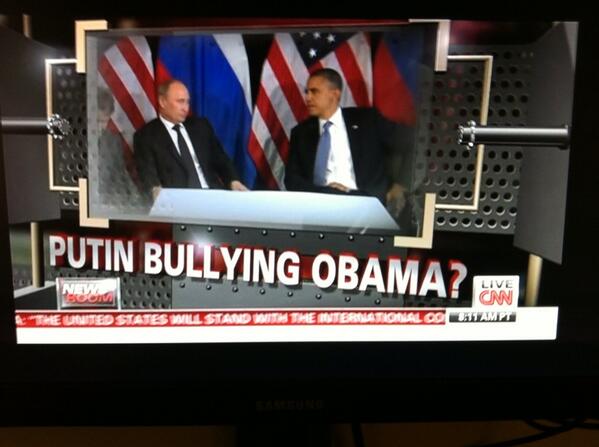 12 UNSPOKEN RULES FOR BEING A LIBERAL[6]