Jorge Torrez is a disgusting murderer who mocked his victims father who served jail time for his crime.[1] 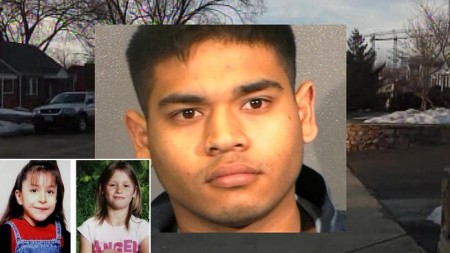 An ex-marine charged with fatally stabbing and raping two young girls in 2005, might never stand trial for their killings – and laughed when he was told the father of one of the children wrongly spent five years in prison for the crime. Illinois native, Jorge Torrez, was found guilty earlier this month of another murder – that of Navy sailor Amanda Snell – and has refused to defend himself as the jury decides whether to sentence him to death or life without parole for that crime.

Indeed, as part of that process in the Virginia court room, the jury heard the frantic and horrifying 911 call made by the wrongly imprisoned Jerry Hobbs, after he discovered the mutilated bodies of his daughter, Laura Hobbs, 8, and her friend Krystal Tobias, 9. That horrifying crime occurred in Lake County in Illinois and authorities there are keen to have Torrez stand trial – despite his insistence on being put on death row. The Virginia court were shown graphic pictures of the crime scene and heard Hobbs, who is now, 43, moaning in the background after he and Laura’s grandfather, Art Hollabaugh, made the gruesome discovery in a nearby park.

Laura’s father, Jerry, was originally charged in that case and spent five years in custody until the DNA evidence pointed to Torrez. Hobbs said he was coerced into a false confession. Illinois prosecutors are still waiting to put Torrez on trial.

Torrez was only 16 at the time of the girls’ deaths. Jurors also heard recordings of a confession Torrez made to an inmate who was acting as a confidential informant. The same informant told police that Torrez laughed when he was told that Hobbs was convicted of his own daughters murder and that of her friend.

The best punishment for Torrez would be to put him in the general prison population in a pink dress and lipstick… just sayin’.