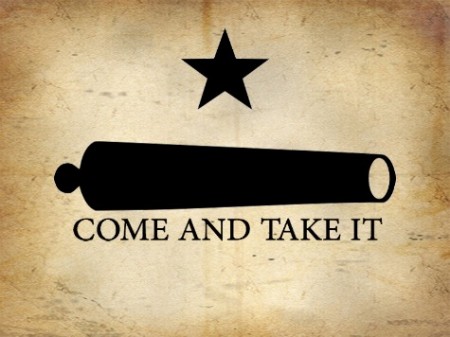 “I am about ready,” General Abbott told Breitbart Texas, “to go to the Red River and raise a ‘Come and Take It’ flag to tell the feds to stay out of Texas.”

Gen. Abbott sent a strongly-worded letter to BLM Director Neil Kornze, asking for answers to a series of questions related to the potential land grab.

“I am deeply concerned about the notion that the Bureau of Land Management believes the federal government has the authority to swoop in and take land that has been owned and cultivated by Texas landowners for generations,” General Abbott wrote. “The BLM’s newly asserted claims to land along the Red River threaten to upset long-settled private property rights and undermine fundamental principles–including the rule of law–that form the foundation of our democracy. Yet, the BLM has failed to disclose either its full intentions or the legal justification for its proposed actions. Decisions of this magnitude must not be made inside a bureaucratic black box.”

In an exclusive interview with Breitbart Texas, General Abbott said, “This is the latest line of attack by the Obama Administration where it seems like they have a complete disregard for the rule of law in this country …And now they’ve crossed the line quite literally by coming into the State of Texas and trying to claim Texas land as federal land. And, as the Attorney General of Texas I am not going to allow this.”

Abbott told Breitbart Texas he wants to make sure the BLM understands that what they appear to be attempting to do is completely illegal. “This is Texas land. It belongs to Texas and the private property owners here,” Abbott firmly stated. “If we have to, we will assert quick and effective legal action to put a stop to it.”

The problem is that the Public Education System for decades has purposefully hidden the Bill of Rights from being taught in the classroom. I did not receive a full introduction to the Constitution even in my Honors classes. In doing so the Department of Education has successfully raised generations of workers who are blind to the rights of citizens. These workers become employed in the BLM, the NSA, the IRS… following orders that are in direct violation of their fellow citizens rights. The only way to combat these land grabs from the Federal Government and infringements by other Federal Departments is to educate citizens on the Constitution En Masse.

Also other ways of destroying Liberty is to produce a lazy and compliant voting army,
What This Liberal Says About Not Working Will Drive You INSANE[3]