‘My dad was a soldier. He’s in heaven now’: Touching note to soldier from eight-year-old son of dead Iraq veteran

I want to track down this boy’s mother and shake her hand. Myles Eckert was a newborn when his father, Army Sgt. Andy Eckert, was killed in Iraq. So when Myles, now 8, found a $20 bill in a Cracker Barrel parking lot, he decided to give it to a soldier to thank him for his service[1]. 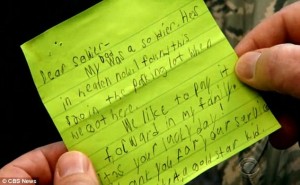 Dear Soldier – my dad was a soldier. He’s in heaven now. I found this 20 dollars in the parking lot when we got here. We like to pay it forward in my family. It’s your lucky day! Thank you for your service. Myles Eckert, a gold star kid.

The recipient called it “incredible.” By the way, Myles at first considered buying a video game, but decided to honor his dad’s memory instead. It’s great to see an 8-year-old with straighter priorities than most adults.

Also see: 12 Unspoken Rules for Being a Liberal [3]