Family of Slain Omaha 93 Year-Old: “…my grandmother would be still alive if our borders were secured.”

The Obama Administration wants you to believe the border is more secure than ever. Good luck selling that to Bill Harzell:[1] 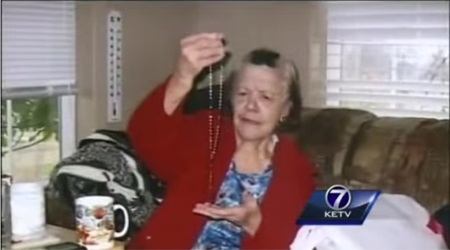 A relative of an elderly Omaha woman who was raped and killed last year said Saturday that the brutal crime may have been prevented if the United States strictly enforced immigration laws.

“What we’d like to have is the federal government to secure our borders,” said Bill Hartzell, 60, of Council Bluffs. “There’s a chance my grandmother would be still alive if our borders were secured.”

Hartzell is the husband of Teresa Hartzell, a granddaughter of 93-year-old Louise Sollowin. Sollowin died three days after Sergio Martinez- Perez, a Mexico native in the U.S. illegally, broke into her South Omaha home, beat her and sexually assaulted her. Nineteen at the time of the attack, he was sentenced to life in prison. The attack occurred one year ago today.

“We have people coming across our southern border illegally,” Bill Hartzell said. “We’re not against immigration.”

Sollowin was an immigrant who moved from Italy to the United States. She spent 60 years helping her sister, Frances Orsi, at Orsi’s Italian Bakery in Omaha. Her late husband, Joe Sollowin, did the books for the family business.

“She certainly had more life to live and more love to give,” said Council Bluffs Mayor Matt Walsh, who spoke at the event. “That life was taken from her by inexplicable evil.”

The left doesn’t care about a 93 year old woman if she stands in the way of the agenda. She’s just another victim to the left’s revolution.

The Problem With Airbrushing Kim Kardashian[5]