Berkeley’s City Council thinks it’s awful that low income people can’t enjoy the medicinal benefits of weed, so they’re mandating the medical marijuana dispensaries in the city surrender 2 percent of the amount they sell all year to folks who can’t afford a dime bag. 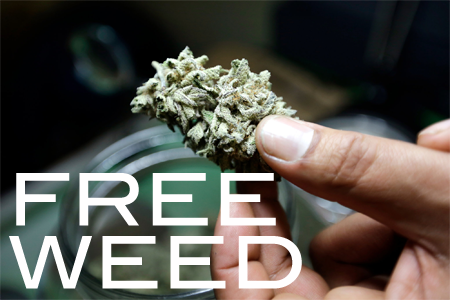 The proposed ordinance, first reported by theEast Bay Express,: requires that Berkeley dispensaries give away two percent of the amount of cannabis they sell each year low-income people. And the pot can’t be poor quality either. The proposed: city ordinance reads: (PDF) that the “medical cannabis provided under this section shall be the same quality on average” as marijuana “dispensed to other members.”

“It’s sort of a cruel thing that when you are really ill and you do have a serious illness… it can be hard to work, it can be hard to maintain a job and when that happens, your finances suffer and then you can’t buy the medicine you need,” said Sean Luce with the Berkeley Patients Group.

It’s sort of a cruel thing that when you’re a business owner, and you do own a business…it can be hard work, it can be hard to maintain a business, your finances suffer because the government forces you to give away your inventory.

The story here isn’t that poor people are getting discounted medicine.

It’s that the government is simply telling a business to give away what they sell for zero compensation. : How is that not the outrage?

Forget the debate about marijuana. : We need a debate on the role of government.

See also: : Mother of 3 Burned Down Home After She Caught Boyfriend Cheating