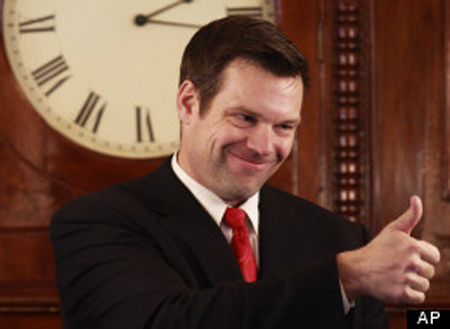 A federal judge in Kansas on Wednesday ruled that the federal agency which oversees the federal voter registration form must include the state-specific proof-of-citizenship requirements requested by both Kansas and Arizona.

The ruling was hailed by Republican officials in both states. And it also does away with the need for the “two-tier” voting systems that were proposed while the case was pending.

“This is a huge victory for the states of Kansas and Arizona,” Kansas Secretary of State Kris Kobach (R) said in a statement. “They have successfully protected our sovereign right to set and enforce the qualifications for registering to vote. We have now paved the way for all 50 states to protect their voter rolls and ensure that only U.S. citizens can vote.”

The case was complex. Both Kansas and Arizona have proof-of-citizenship laws on the books, requiring people to prove they are U.S. citizens when registering to vote. But the Election Assistance Commission (EAC), the agency which maintains the federal voter registration form, had denied requests from the states to add the proof-of-citizenship requirements to state-specific instructions on the form. So the states sued. (If you want more on the technical background, University of California-Irvine law professor Rick Hasen wrote a helpful summary of the: here[3].)

In his ruling, U.S. District Judge Eric Melgren found that “the decision of the EAC denying the states’ requests to be unlawful and in excess of its statutory authority. … Therefore, the Court orders the EAC, or the EAC’s acting executive director, to add the language requested by Arizona and Kansas to the state-specific instructions on the federal mail voter registration form, effective immediately.”

In an interview with TPM, Arizona Attorney General Tom Horne (R) expanded on a statement he issued in response to the ruling.

“I feel there’s been a media cover up of the extent to which voter fraud is a significant problem in Arizona,” Horne said, citing findings a few years ago in which he said more than 200 people who filed out jury duty forms in the state had also fraudulently registered to vote. “[The ruling is] a significant victory for the people of Arizona over the Obama administration to assure that only citizens and not illegals vote in Arizona.”

Last year, before the resolution of the EAC issue, officials in both states faced the prospect of having residents register to vote using a federal form that didn’t require proof-of-citizenship. So they took steps to create “two-tiered” voting system, where people who registered with the federal form could vote in federal elections – but not state or local ones. Wednesday’s ruling appears to make that matter moot.

It remains to be seen if the ruling will be appealed. But Horne pointed out that the ruling is effective immediately, and the 2014 election is not far off.

“Somebody will appeal it I’m sure, but the decision by its terms says that it has to be implemented immediately,” he said.

There’ s no doubt this will be appealed. : And as Weasel Zippers[4] said, the “DOJ fast and furiously shopping for another Judge to overturn the ruling.”