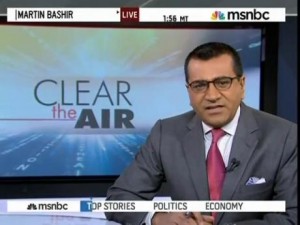 Martin Bashir has learned something Alec Baldwin already knows: Even a cable news host can say too much.

MSNBC announced Wednesday that Bashir, a commentator and host of the 4 p.m. hour, is leaving after an uproar over his remarks last month about former Alaska Gov. Sarah Palin. Disputing Palin’s position that compared the national debt to slavery, Bashir during an on-air segment called Palin “America’s resident dunce” and then suggested a slave-like scatalogical punishment for her.

Here’s exactly what he said:

Believe it or not, this was actually defended by Dana Milbank.[3]