Live From Haiti: First impressions of Jacmel, and the boy in the blue sweatshirt.

I got to Jacmel today. We left Miami early this morning and flew in to Port au Prince. I’m not sure what I expected — but the scene at the airport was crazy. I was told that it wasn’t all that different from normal. The gates were completely swamped with people — all of them wanted to help us, so we would tip them.

The red gates of the Port au Prince airport. We pushed our way through the crowd to meet the van that transported us to the small plane we took from Port au Prince to Jacmel. 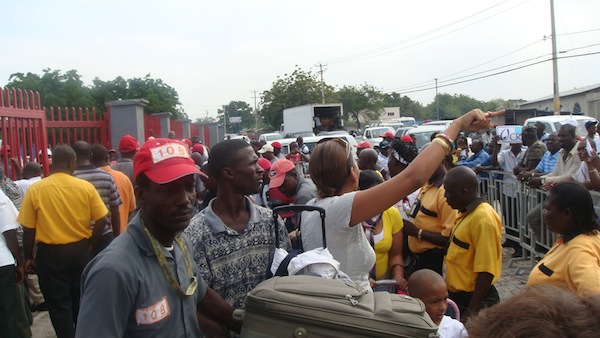 I’m going to leave out most of the travel logistics because they’re boring and blessedly uneventful. We got to Jacmel around lunch time and ate, then left on a walking tour through the city.

I have followed blogs, and seen hundreds of photos. I have watched videos. I’ve spoken to people on the ground. I knew coming that I couldn’t truly be prepared. And I can honestly say that it was what I expected. But it’s nothing like seeing it in person. I’ve been mulling for hours, going back through the 300 or so photos I took, trying to articulate it. I’ll do the best I can.

We walked through the “tourist section” — the place where cruise ships would drop people off to shop, eat, etc. The people expected us to be taking pictures. A lot of clean up has been done, but it’s still just incredible. At times it was hard for me to tell which things were: dilapidated prior to the quake and which things crumbled on January 12th. We moved out of the “tourist” district into the “poor” district, as Nick Mangine described it to me. People were sitting in tents, just trying to figure out how to go on with their lives. They were shoveling debris out of the street. They were sitting there on porches, walking in and out of crumbling buildings. This is becoming their new normal.

Haitian girls pose as we walk through Jacmel. 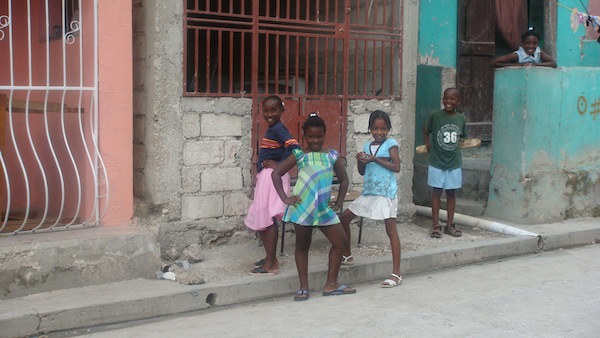 We eventually made it to what used to be the soccer field — and what is now a tent city. I stepped in and was greeted by kids — some of them half naked, all of them just begging to be noticed. We took some photos with them, and the joy they got from seeing themselves on our camera screen made it worth it. We made our way around the muddy path between the tents, kids clinging to us on all sides. All they wanted way to be noticed. To be touched. One little boy in particular clung to my waist, muttering “bella… bella…”.

Me with a bunch of the kids at the refugee camp. 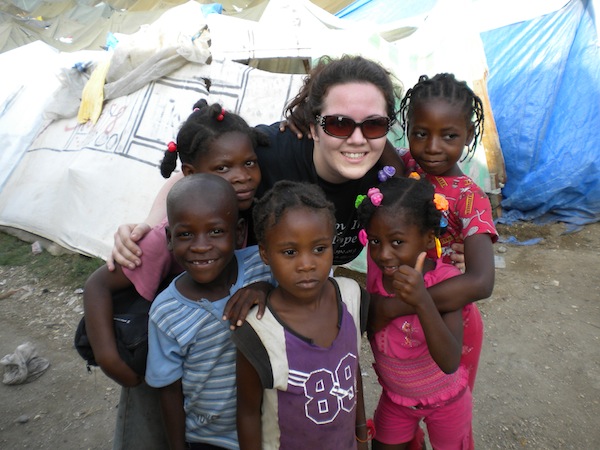 A little boy in a blue sweatshirt completely stole my heart. He held onto my two fingers the entire walk, holding on for dear life. At one point, he lost his grip amidst the swarm of kids and just started crying. It occurred to me that I had no idea where his parents were, or if they were even there. I may very well have been the first kind touch he’d gotten in who knows how long. I grabbed his hand, and he calmed down quickly.

Me with the boy in the blue sweatshirt. He stole my heart. 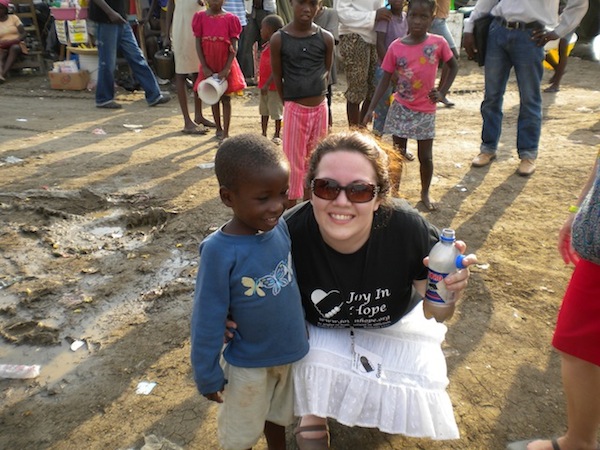 The brutal part was leaving. By the time I reached the walkway back to the street, I have who knows how many children clinging to my arms and hands and waist and clothes, playing peak-a-boo with the other team members behind my skirt. It was clear that they just wanted to come with us. I couldn’t do anything but push them off me and run. A piece of my heart stayed there.

I cried most of the way back to the house after that. I don’t know that anything can match what I saw today — but I also know I just touched the tip of the ice berg. Tomorrow I head over to the orphanage to spend time with babies, and then over to Citae — a small town which has received basically no aid. I’ll be sure to update as possible.

Beautiful little girls peaking out from their tent in the street. 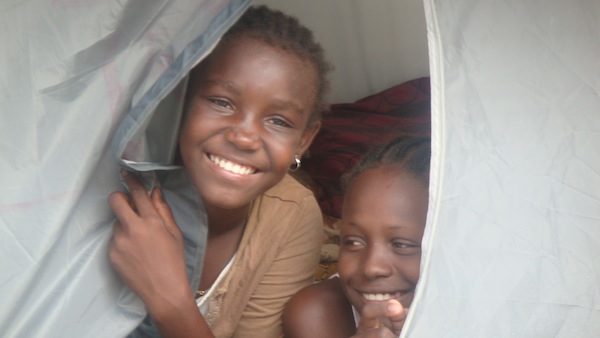 I’m still not certain what to do with everything I’m seeing. This is the most difficult thing I’ve ever witnessed.