Animals are creatures of God and should be treated as such. This woman treated her dog like man’s worst friend when they are considered: the most loyal pet by taping its’ mouth closed and neglecting it in a cage.[1] 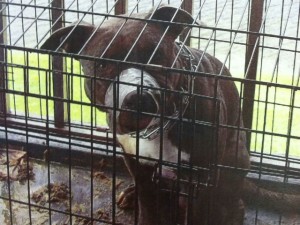 BOYNTON BEACH, Fla. – A local woman is under arrest, accused of doing something extremely cruel to her pet. He may be man’s best friend. But officials say Andrea Curiel, 29, of Boynton Beach treated her dog like her worst enemy. She’s accused of duct-taping her dog’s mouth shut. She is charged with animal cruelty. About two weeks ago, authorities went to Heron Pointe Apartments, 10026 Boynton Place Circle in Boynton Beach, after getting a tip about a caged dog on a third floor balcony, with its mouth taped shut with duct-tape. Sheriff’s deputies and Animal Care and Control went there, and got in with the help of Curiel’s roommate, and rescued the dog.

“He was in a crate with duct-tape wrapped around his mouth, and wrapped behind his head to prevent him from clawin’ it off. Luckily somebody saw this, because this is a horrible situation for a dog. This person was in the right spot at the right time,” said Capt. David Walesky, Palm Beach County Animal Care and Control spokesman.

“I just can’t believe that people could actually do that to animals. That’s like your child, you know,” said Robin Erwin, a neighbor. The dog, a male pit-bull, is now recovering at Palm Beach County Animal Care and Control and will soon be put up for adoption. Dogs rely on panting to help keep themselves cool and regulate their body temperature, making this crime especially cruel during hot weather. Curiel faced a judge this morning where bond was set at $3,000. She posted bond.

I think it would be cruel to be left in a kennel on a porch with no way to cool myself off. Seriously, if people get : an animal they should EXPECT to take care of it.