George Soros Was Smacked By His Ex-Girlfriend During Deposition Hearing…

How can you tell George Soros is worth more than 20 billion dollars? Because he’s 83 years old and his ex-girlfriend is a 30 year old South American soap actress. Apparently, their relationship didn’t end on a happy note[1]. 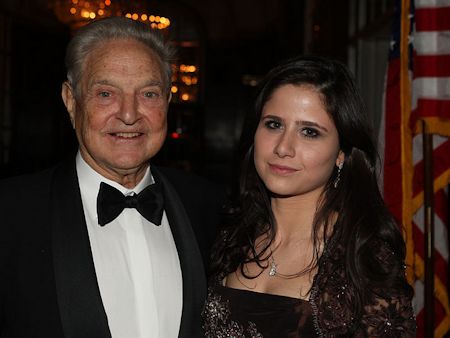 George Soros’ former girlfriend came out swinging at her billionaire ex during a private deposition for her multi-million dollar lawsuit against the octogenarian, newly filed court papers allege.

Adriana Ferreyr, a South American soap actress, clocked Soros in the head, knocked the glasses off his California lawyer Martin Singer, cursed his other prominent lawyer William Zabel and even screamed at her own high powered attorney William Beslow, according to papers filed Friday by Singer.

“A–h–le! You piece of s–t!” Ferreyr, 30, allegedly screamed at Soros, 83, when he passed her in the hallway on the way to the restroom.

The Tuesday deposition — where Ferreyr’s lawyer got to ask Soros questions under oath — had been going on for about two hours when Ferreyr suddenly appeared with a videographer and demanded that the proceedings be filmed, the latest filings state.

Singer said in the court papers that Ferreyr insisted in a loud voice: “I am filming and calling CNN. Everyone!”

When he and Beslow agreed that the deposition would not be filmed, Singer said, Ferreyr hit Beslow in the arm and then thumped out of the room, slamming the door.

Her first direct confrontation with Soros followed in the hallway. Singer said she then yelled at Beslow for 20 minutes before everyone returned to Beslow’s conference room for the deposition.

Ferreyr then insisted the deposition could not proceed until she could get her computer to work. Meanwhile, he said, she started trying to videotape the proceedings with her telephone and he objected again, Singer said.

Ferreyr is suing Soros for breaking his promise to give her a $1.9 million Upper East Side condo. Instead, he gave it to the woman he married last fall, Tamiko Bolton. A judge has ruled that Ferreyr could press her case against Soros for inflicting emotional distress.

Singer said that when he objected again to her recording and Beslow asked her to stop, Ferreyr “began to yell expletives at me…and…prevented Mr. Beslow from asking any questions of Mr. Soros.”

When the lawyers agreed at 1 p.m. to break for lunch, Singer said, Ferreyr “suddenly and without warning … lunged at Mr. Soros — who is 83 years old — and struck his head with her hands, knocking off the headphones he was wearing to amplify the audio in the room.”

Wow, she seems every bit as stable as you’d expect from a 30 year old banging a malevolent financier who got his start working for the Nazis — in other words, not very. On the other hand, a 30 year old in her position is essentially a prostitute and she didn’t get stiffed out of $200, it sounds like she got screwed out of a 1.9 million dollar apartment. In all fairness, if you slept with a wrinkled old monster like Soros and didn’t get your 1.9 million dollar condo, you’d probably be pretty cranky, too. Since Soros has an almost infinite amount of money, it’s surprising he didn’t just give her the condo. After all, it’s not like he’s going to miss it and it certainly beats being dragged into an unpleasant, time-consuming trial where your ex-girlfriend makes news across the world for smacking you in the mouth.