George Will: The Obama Administration’s Cries of Racism Are “Becoming a Joke” (Video)

Clearly, George Will is a racist, or something:[1] 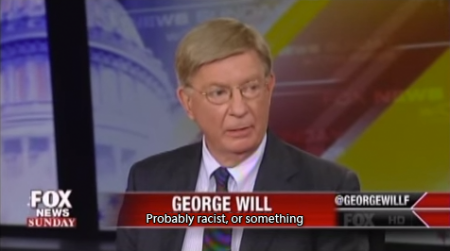 “Liberalism has a kind of Tourette Syndrome these days. It’s constantly saying the words racism and racist.: There’s an old saying , if you have the law on your side, argue the law. If you have the facts on your side, argue the facts. If you have neither, pound the table. This is pounding the table. There’s a kind of intellectual poverty now. Liberalism hasn’t had a new idea since the 1960s, except Obamacare, and the country doesn’t like it.

“Foreign policy is a shambles from Russia to Iran to Syria to the Israeli-Palestinian conflict. And, the recovery is unprecedentedly bad.: So, what do you do? You say anyone who criticizes us is a racist. It’s become a joke among young people.You go to a campus where this kind of political correctness reigns and some young person says, ‘It looks like it’s going to rain.’ And, the person next to him looks and says, ‘You’re a racist.’ It’s so inappropriate. The constant invocation of this that it is becoming a national mirth.

It works for them, though. : Mainly because it’s divisive, which is exactly what this administration wants.

It doesn’t want a unified America. : It wants us at each other’s throats.

Proof? : How much better has this administration made race relations? : They could have brought us closer together.

Instead, they’ve done everything they could to push us apart.