Here’s an interesting case. According to court documents[1], an illegal immigrant from El Salvador was busted for marijuana possession in 2006 because the car he was driving — belonging to a friend — had a malfunctioning brake light. A blunt was found in the vehicle, and the immigrant received probation. Meanwhile, the federal government began proceedings to deport him. 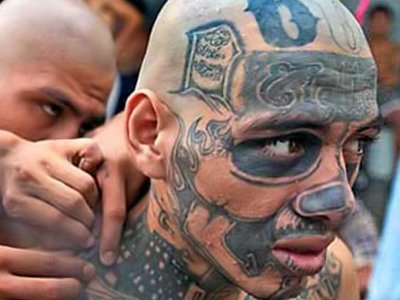 Which brings us to the January 23, 2014 court decision that allows the former gang member, who came to this country illegally 14 years ago, to stay under the banner of asylum[3]. Two Republican Members of the House are taking issue with the decision:

In the wake of an appeals court ruling allowing an illegal immigrant gang member to remain in the country because he renounced his membership, a couple of GOP lawmakers are calling on the Justice Department to appeal.

On Jan. 23 in the matter of Martinez v. Holder, the Fourth Circuit Court of Appeals ruled[4] that Julio Martinez, an illegal immigrant MS-13 member from El Salvador, could remain in the U.S. because he renounced his membership and that gang members in El Salvador would kill him if he returns.

“We are concerned that based on this decision,: gang members will be able to receive asylum or withholding in the U.S., simply by telling immigration authorities that they have renounced their membership in the gang,” the letter sent Friday read. “In the: Martinez: case, an MS-13 gang member did just that.:  Surely it is likely that when gang members are placed in removal proceedings, they will claim that they are no longer a member of a gang and have renounced gang membership in an attempt to circumvent removal. Even aliens who have in fact left gangs were members of criminal organizations and do not deserve the protections of asylum or withholding.”

According to Goodlatte and Forbes, this case could create a loophole for gang members to game the system and stay in the U.S. by simply stating they had renounced their gang affiliation.

In testimony provided during the deportation proceedings, Martinez said he joined a local gang as a youth, but left after things became too violent. He also says he was nearly killed three times for leaving the gang — once by being beaten and stabbed, and twice when he was shot at. Two of those times, claims Martinez, he was hospitalized.

All of this, according to Martinez, took place before he entered the United States illegally in 2000, at the age of 20.

After reading much of the court documentation, it looks like the court gave asylum because Martinez met the multiple standards required to grant it, including the alleged “immutable characteristic” of being a former gang member and fearing for his live if he was returned to El Salvador. And on a human and Christian level, asylum asylum appears to be the right choice, especially since the Bush administration decided to use Martinez in exchange for dropping deportation proceedings.

This leads, however, to multiple questions and concerns:

First, Martinez didn’t ask for asylum until he went through deportation proceedings. As such, his story is naturally suspect, especially since there seems to be no other substantiation for his claims.

Second, should the Bush administration have deported Martinez, or was the compromise of dropping proceedings in exchange for him being an informant a worthwhile one? This happens, after all, with criminals who are citizens of this country every day, but Martinez was not a citizen.

Third, why didn’t Martinez try to be a legal immigrant in the five years between the first and second deportation proceedings?

Fourth, does this situation — as Goodlatte and Forbes believe — create an egregious violation of federal law, thus undercutting the rule of law?

And fifth, should Martinez have been given special consideration after 2011, given he helped the federal government as an informant?

I don’t think there’s an easy answer here. On a pure policy level, Martinez is an illegal immigrant, and given the lack of corroboration for his story, he should be deported instead of given asylum. I just pray that if he is deported, we aren’t sending him to an early grave.