GOP Rep. Tim Huelskamp To MSNBC’s Rachel Maddow: “You’re A Cheerleader For The Administration, You’re Not A Journalist”… 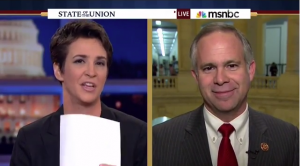 RACHEL MADDOW: Did you vote to cut diplomatic security facilities and their security before the Benghazi incident?

REP. TIM HUELSKAMP (R-KANSAS): No, we had passed additional security measures, as requested by the administration, but don’t forget, the facts of the matter is Hillary Clinton did not request security enhancements, and we do believe that this administration let our troops down and let this diplomat down.

We need more answers there, we need answers about a lot of things. This administration promised to be the most transparent in history, Rachel, and I think if you would stop being a cheerleader and be a journalist, you’d recognize we’re not getting those answers.

MADDOW: Did you just call me a cheerleader?

HUELSKAMP: I don’t know, maybe you had that history. I’m saying —

HUELSKAMP: You’re a cheerleader for the administration; you’re not being a journalist. When you’re not willing to look at the facts. If it was Bush, you would be jumping and screaming.

It’s clear that the only reason Rachel Maddow had Rep. Huelskamp on the show was to mock him. You can tell that from her demeanor throughout the interview.

And that’s nothing but reinforcement for Huelskamp’s premise that Maddow and MSNBC are nothing but cheerleaders for Obama.

I grew sicker the longer I watched this video. Seriously. Rachel Maddow and the whole MSNBC crew sicken me.

And then Chris Matthews showed up and started his slurred rant. And he is still pushing the video line for Benghazi.

Finally, Al Sharpton starts in with his logical fallacies.

They are propagandists for a tyrannical government. They are seriously part of the problem.