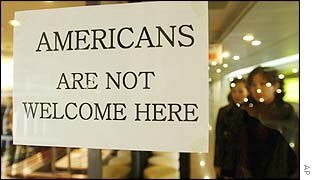 Happy Trails South Korea: You know, I understand how having two foreign soldiers accidentally run over two teenagers in your country during a military exercise could make people angry[1]. I also can see how South Koreans might distrust the military court that ruled that the soldiers weren’t responsible for the accident because faulty equipment was to blame.

That being said, the petty anti-Americanism[2] in South Korea is getting to be just a little bit much for my taste. Yes, two soldiers accidentally killed two Korean girls. On the other hand, the US has 37k soldiers guarding South Korea from their northern brethren. That’s dangerous work, it’s not cheap, and to be frank, we could probably use those 37k soldiers elsewhere in the war on terrorism.

But do we get any thanks for those soldiers or for the 54,246 Americans who died in the Korean war? No, instead we get protest marches, our soldiers assaulted, firebombs thrown at our bases, and people putting up signs saying, “No Americans Allowed” in their restaurants.

I tell you what, if the people of South Korea don’t want us in their country, then let’s leave. Let the protestors deal with that psychotic, little nut Kim Jong Il, his huge army, and the two nuclear weapons he probably has. My guess is that if we left, South Korea wouldn’t have to worry about Americans eating in their restaurants because Korea would finally be united after a bloody war and the South Koreans would be eating grass and moss off of rocks like the people in the North. Maybe Mr. “US troops. Go out!” thinks South Korea will be fine without our help. By all means — let’s find out. After we leave and North Korea’s troops start massing on the border call Kofi Annan — he’ll take care of things — or maybe Jacques Chirac or Gerhard Schroeder will be willing to put their troops in harms way to protect South Korea. So if Mr. “US troops. Go out!” and his ilk really want the big, ugly Americans to go home — they only have to get their leaders to ask. Go for it South Korea — I dare you…