Senate Majority Leader Harry Reid has rewritten his signature ethics reform bill[1] to strip it of meaningful earmark reform, a remarkable development for a Democrat who promised to clean up Washington. Text of the bill was released this morning and is available at the Porkbusters[2] website. Senators Tom Coburn (R.-Okla.) and Jim DeMint (R.-S.C.) have promised a fight.

The chart below was put together by Coburn’s office to show the extent of the changes. Meanwhile, DeMint’s office says the senator will offer an amendment[3] with his earmark reform language, which was agreed to on a 98-0 vote[4] in January. The concern is that Minority Leader Mitch McConnell (R.-Ky.), fearful of picking a fight over ethics reform, might cave in to Reid. 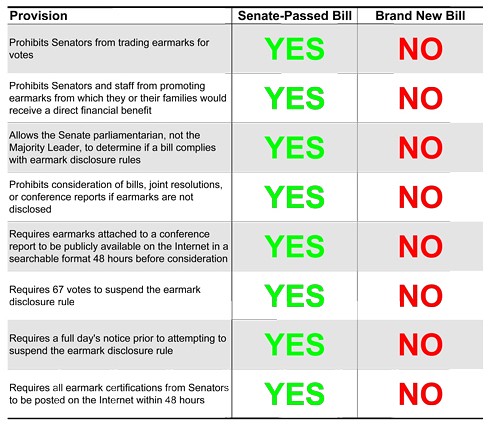