He means it this time: President “Mom Jeans” Obama slaps sanctions on a 20 more Russian individuals Putin not impressed

President Obama, leader of the free world, announced some more pinprick sanctions that making him the laughingstock of the world.:  What’s next?:  Banning Vodka?

USA Today[1] reports President Obama announced on Thursday that he is levying additional sanctions against 20 high-level Russian officials and associates of Russia President Vladimir Putin as well as a bank in response to Moscow’s move to annex the Crimea region of Ukraine. 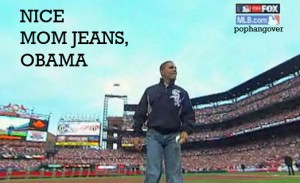 The White House has repeatedly called the referendum and Russia’s action “illegal.”

“This is not our preferred outcome,” Obama said in a statement from the South Lawn of the White House. “These sanctions would not only have a significant impact on the Russian economy, but could also be disruptive to the global economy. However, Russia must know that further escalation will only isolate it further from the international community.”