He Thought He’d Never Have to Use His Gun, And Then…

The thing about guns is, it’s better to have it and not need it, than need it and not have it. : Kenny Guffey never thought he’d have to use his gun, and then a knife wielding man crashed through his mom’s front door[1]: 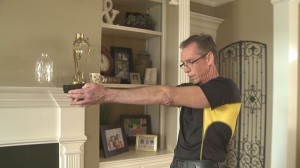 He was only about two minutes away from the home when his phone call with his mother took the horrifying turn. Guffey entered the house with his gun drawn, ready to defend his mother.

When he went through the door, he witnessed the suspect standing over his mother with a shovel. What happened next sounds like something out of a Hollywood thriller.

Lynch, the suspect, used the shovel to knock the gun out of Guffey’s hand. But the man fought back, tackling the suspect and managing to get his gun back.

Guffey says he then sat on top of Lynch and held his gun to the back of his head while his mom called 911. He looked down and saw the man’s knife.

As it turned out, the suspect didn’t feel like losing his life, so he didn’t fight it. Bount County deputies arrived a short time later and arrested the would-be robber.

Guns are the great equalizer.

If mom was packing and was ready to use it, Lynch wouldn’t have walked out of the house in cuffs.

As it is, it was still a “happy” ending.

Here’s some news footage of the story:

See also: : Connecticut Cop Who Said He’d Love to “Bang Down Your Door and Come For Your Gun” Placed On Leave