First of all – BREAKING: Rep. Alan Grayson is a filthy rich businessman! 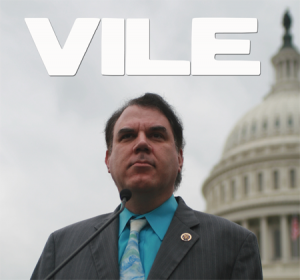 U.S. Rep. Alan Grayson of Florida lost $18 million in a scheme that cheated him and about 120 other investors out of more than $35 million, according to court papers.

The Virginia man who ran the scheme, William Dean Chapman, was sentenced Friday in federal court to 12 years in prison. Prosecutors say Chapman used the money to fund a lavish lifestyle including a Lamborghini, a Ferrari and a $3 million home.

In most of the court papers, Grayson’s identity is protected – prosecutors say only that an elected official with the initials A.G. was the primary victim – but documents twice mention Grayson by name. The Democratic congressman on Monday confirmed he is the A.G. mentioned in the documents.

I had no idea Grayson was one of the richest people in Congress.

I knew he was one of the most despicable though.

Hard to miss that.