This is the kind of person we need in America–a person who sees wrongdoing and leaps into action, rather than standing around waiting for someone else to take care of it. (Or worse, just not giving a damn, as was the case with the bystanders in this story.) An LA taco stand cook named Jesus Delgado ran across multiple lanes of traffic to stop a deranged man from kidnapping a 4-year-old boy. [1] 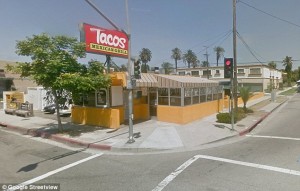 [2]
It started when the kidnapper punched Grady O’Brien’s nanny in the face and snatched the boy.

The heroic man scooped up the frightened child from the unstable man and held him down until police arrived, according to reports.

Delgado told local media his dash to save the child was instinctual because he has a four-year-old daughter – ‘I’m also a father,’ he said.

‘There were like 100 people standing here when this happened, he’s the only one that did anything,’ a witness said.

You read that right: about 100 people agreed with the kidnapper that it “wasn’t their problem” and went about their day while a preschooler was being kidnapped. Disgusting. (However, I’m betting at least one found the time to Tweet or Instagram it.) I hope Delgado is rewarded for his selfless and courageous actions.

Also see: The 15 Most Annoying Things About American Culture[4]