So, let me get this straight. We can’t put a fence on the border to keep illegal aliens out, but we can put one around a high school to keep the stars and stripes off campus? The irony…it hurts:[1] 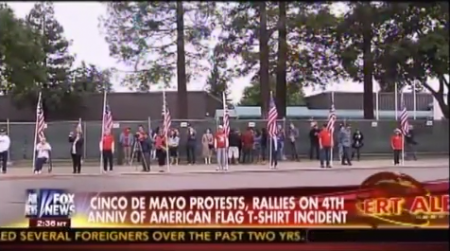 A Morgan Hill high school has constructed a fence to block protesters from disrupting classes on Cinco de Mayo, after plans were announced by a Tea Party group to protest the school’s 2010 decision to send students home for wearing the American flag on the Spanish holiday.

Calls for demonstrations and counter-demonstrations, and even suggestions that a group of motorcyclists will arrive prompted authorities to put the fence around the front of Live Oak High.

“Usually when you put up a fence, it’s a barrier. And, we interpret it as a barrier to keep out the first amendment,” President of the Gilroy-Morgan Hill Patriots, Georgine Scott-Codiga said.

“I don’t believe there’s any need in America to suppress a national symbol of patriotism and freedom,” she said.

Clearly they are racist, or something.