When I first read this ABC headline, Hillary Clinton Says She’s Donated All University Speaking Fees, I assumed the money was donated to an entity like the Red Cross or 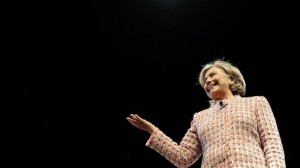 [1]Catholic Charities, or other organization. But, after reading the article it turns out that Hillary is putting the money back into her own foundation.

ABC News[2] reports Hillary Clinton continued to justify her high-dollar speaking fees on Friday, telling ABC News’ Ann Compton that all of the money she’s made from colleges over the past year and a half has been donated to her family’s foundation.

“All of the fees have been donated to the Clinton Foundation for it to continue its life-changing and life-saving work. So it goes from a foundation at a university to another foundation,” Clinton said when asked about the criticism she and her husband have faced recently for their wealth.
Hillary Clinton reportedly makes roughly $200,000 for each speaking engagement. And recent reports show that she has made much more from some of the country’s top universities.

Donating the money to her own foundation is a slick way of paying herself. And that’s fine, but it’s dishonest for her to say she donating the money as if she’s giving it to some other charity she has nothing to do with.

Origianlly posted at The Last Tradition[4]