: Like many progressives Hillary Clinton is a total media myth.:  The sun total of her life in politics is s string of mindless sound bite like “fighter for 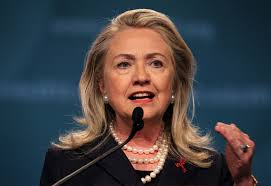 [1]women” without a single concrete accomplishment.:

There is no law with her name on it.:  There is no organization that bears her name that is activity doing what she claims she has done.:  All she has is the media saying “she fought” and that’s suppose to be enough because her heart was in the right place.

That’s the way it is in the progressive word where actual achievement is not a prerequisite.:  But, what Hillary does have is a miserable record as secretary of state.:  Oh she traveled a lot.:  But look what happened with her at the helm of the State Department.:  Four Americans died in Benghazi as a direct result of her not taking action to save:  or protect them.:  That’s the real Hillary Clinton.:

So when you watch this video remember it’s made to distract attention away from the real Hillary Clinton into the manufactured one.: :

Originally posted at The Last Tradition[3]