Hitler Youth Would Tell You That Your Moms Lunch Sux Too! 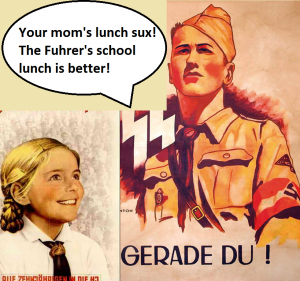 My Dad is 1st generation American with his parents emigrating from Germany in the mid 50’s. Having grown up in a post WWII America where Germans were viewed suspiciously and as underclass citizens, his views have definitely been shaped from an interesting perspective. Dad and his siblings were always the “Axis” in Axis and Allies, the “Indians” in Cowboys and Indians. And they always had to lose. Needless to say Dad reflected more on the influence of Hitler than the average American child.

Last week my Dad called me alarmed about the child in NC whose lunch was judged and discarded by the “school- lunch police”. (Later as a correction, the Hoke County Schools Assistant Superintendent Bob Barnes said[2], “We do not go over and stare down every child’s lunch. However, there are occasions that kids bring lunches that aren’t that complete, and that’s why we try to supplement them with the things that they need to make it a complete lunch.” Mr. Barnes still infers that the school system should have the last say in the health and well-being in a child’s welfare). My Dad then said one line that really hit me hard “Tiffiny, the public school system made one very important point to this little girl. They told her that her parents don’t care as much about her as they do. That teacher breeched the relationship between parent and child so that when that child is in her teens, the rebellious stage; it will be simple to turn her parent in because she will have built up more trust in the system than in her parents.”

When my Dad makes a statement like that, I often roll my eyes thinking he’s going a little overboard. But then I thought of the HJ or Hitler- Jugend[3]: .:  On occasion I’ve asked my Dad if my Grandpa ever talked about his own days in the HJ but my grandfather has remained silent about his required service as Hitler’s Youth.:  I have often been intrigued with the forced formation of the German youth army, membership becoming compulsory for all youths in December 1936. Several times my Dad and I have discussed the influence of the HJ on the German nation, especially when the confidence of parent-child or individual- civil liberties are being breeched right here in our own United States.

To most of us the HJ was over 75 years ago and in another time and another place. It’s hard to imagine that ideas of yesterday would ever affect the technology driven, educated peoples of the FREE world. And yet to hear the words of that ancient relic known as the Furher, it’s haunting to see that we in this civilized nation may be falling for some of the same tricks that my ancestors fell for. Referring to how to create a loyal army the Fuhrer said about his youth “I don’t want them to have an intellectual education. Knowledge would spoil my young people. I prefer that they learn only what they pick up by following their own play instinct.” Hitler 1933 quoted in the introduction to Hitler Youth in Poland [4]

Creating an army who no longer rely on common sense or problem solving, who rely simply on instinct is a pretty powerful program. An army, who can follow only simple commands, scares me. But this type of army can’t be created in the intelligent young bodies we send off to school each morning, as this idea is something I cannot fathom.

Just so you understand where I’m coming from, I am the single mother of a 10-yr old boy, homeschooling my son through the 3rd grade. If we lived in 1936 Germany he would be required to enroll as a Hitler- Jugend. The activist in me would adamantly protest that law, resulting in the removal of my child from the home and placed into a state orphanage. I try to imagine a world where the state or government has the final say over my precious child. It isn’t that difficult to imagine as we have seen recently where the Government is so concerned with our children’s health that they have taken the reins on the issue and have begun to dictate to parents what they should and should not feed their children (we are steps away from that turning into “can” and “can not”). Even the Furher was concerned with the health of his youth as he has been quoted [5]often to saying things like, “I shall have them trained in all forms of physical exercise. I want an athletic youth.” But I have my doubts that Michele Obama or her crew are actually concerned about the health of youth or the obesity problem since there is really no evidence that American children are dying from either starvation or obesity, as a matter of fact Americans are living longer [6]lives than ever before according to recent studies

Then why would our nations Patriot tax dollar funded schools run a huge campaign about the foods children are given? I am talking about something more ominous, I am talking about the systematic targeting of the relationship between the parent and the child. This technique of putting a wedge between God/ parent/child is not a new technique. Though really refined with recent philosophers and students like Marx, Lenin, Hitler, Mao. In the 21st Century the approach to gaining patriarchal power over our children has taken different disguises, most recently with public education and social programs like school lunch programs. Both designed to dumb down a child and undermine the will and responsibility of the parent. Remember I said I homeschooled my son through the 3rd grade? In my first parent teacher conference with my sons Kindergarten teacher she suggested I stop teaching my son and leave the education to “them”. I have a tender spot in my heart for all children and every time I see our children being the targets of an agenda designed to take away their personal resolve and agency to choose, I weep. It’s true, anytime I hear someone talking about our broken education system you will most definitely see me get out the Kleenex box. You and I have become busy working our butts off paying taxes, while we have allowed the conveniences of public programs to root their way into the lives of our children and our responsibilities. We have surrendered our rights to the point that even our genuine attempts at parenting are allowed to be undermined by the state. 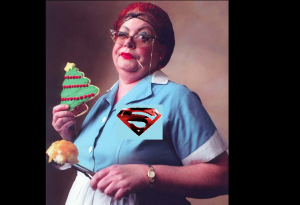 [7]
We have a 4 year old child being told that her mommy doesn’t care about her enough to give her a healthy lunch, enter the PSS lunch lady who becomes the new hero. Our grade school teachers are paid to take time to teach our children about sex and contraceptives while, we slave the day away: worrying how we’ll fare on April 15th : : tax day. Do we realize that we are being put through a smokescreen so that our next generation can be educated in someone else’s house? How many intrusions will we as parents let slide until we discover that we haven’t been the ones garnering the trust of our youth? They are our hope, they are supposed to be the ones to carry our torch of freedom forward and protect us in our golden years. They will be the ones to stand up for us… right?

Adolph Hitler puts it very well in a speech he gave in 1933 (quoted from The Rise and Fall of the Third[8] Reich by William Shirer) “When an opponent declares, ‘I will not come over to your side”, I calmly say, ‘your child belongs to us already . . . What are you? You will pass on. Your descendants, however, now stand in the new camp. In a short time they will know nothing else but this new community.‘” And on May 1, 1937, he declared, “This new Reich will give its youth to no one, but will itself take youth and give to youth its own education and its own upbringing.”

Some may say that I am going overboard with this analogy between the techniques: of: the HJ: and techniques that are being applied to our children in the public realm. I guess that is up to you to decide. : I come from a line of: ancestors who were complacent, trusting and kept to themselves which led to the rise of the worlds greatest takeover of good people, right under their noses. Is it possible we are falling into a similar trap with our children? What are you doing today to stand up for our children and preventing your legacy being overshadowed by the state agenda? Educate your child on the history of the past and strengthen their knowledge on their basic rights. I am proud to have my son enrolled in a local charter school that focuses on Thomas Jefferson education. If you are interested in starting a leadership charter school in your neighborhood please contact me at [email protected][9]. Find me on Twitter: @TheRightMixx[10]