Our own Homeland Security is accused of smuggling illegal immigrant children INTO the country[1]. That seems to be the opposite of its mission[2]: 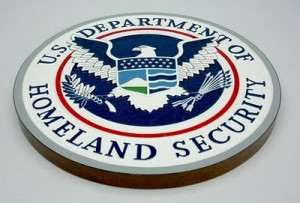 A federal judge in Texas late last week accused the Obama administration of aiding drug cartels, saying that instead of enforcing immigration laws, agents knowingly helped smuggle an illegal immigrant girl into the U.S. to live with her mother, also an illegal immigrant, in Virginia.

In a 10-page order, Judge Andrew S. Hanen said the case was the fourth such case he’s seen over the last month, and in each instance Customs and Border Protection agents have helped to locate and deliver the children to their illegal immigrant parents.

The judge said in each case, the taxpayers footed the bill for flights – including flights to multiple locations in different parts of the U.S. that it took to find one of the children’s parents.

How does this happen?

The agents apprehended the smuggler and the young girl, and prosecuted the smuggler, but delivered the daughter to Ms. Salmeron Santos in Virginia, even though agents were aware she was in the country illegally.

“The DHS, instead of enforcing our border security laws, actually assisted the criminal conspiracy in achieving its illegal goals,” the judge said. “It completed the mission of the conspiracy initiated by Salmeron Santos. In summary, instead of enforcing the laws of the United States, the government took direct steps to help the individuals who violated it. A private citizen would, and should, be prosecuted for this conduct.”

Unreal. Yet another crime, allegedly, committed by the Obama Administration.