“Honor Killing” In Pakistan: Woman Stoned To Death By Family Outside Court For Refusing To Marry Cousin 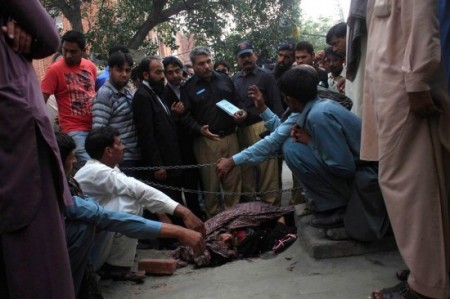 A 25-year-old woman was stoned to death by her family outside the Lahore High Court on Tuesday for marrying the man she loved, police said.

Farzana Iqbal was waiting for the court to open when a group of around dozen men began attacking her with bricks, senior police officer Umer Cheema said.

Her father, two brothers and former fiancé were among the attackers, he said. Iqbal suffered severe head injuries and was pronounced dead in hospital, police said.

All the suspects except her father escaped. He admitted killing his daughter, Cheema said, and explained it was a matter of ‘honour’.

Iqbal had been engaged to her cousin but married another man, Cheema said. Her family registered a kidnapping case against him but Iqbal had come to court to argue that she had married of her own free will, he said.

The lot of them.

See also: : Liberals Are Super Upset About A Few People Killed With A Gun…