More like an indictment of Maryland’s government school system:[1] 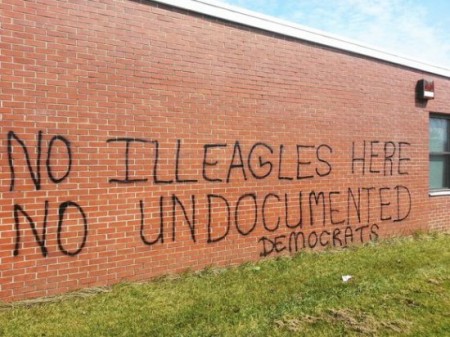 The graffiti was sprayed sometime Saturday night or early Sunday morning, according to Lt. Patrick McCrory, commander of the state police Westminster barracks. The graffiti said “NO ILLEAGLES [sic] HERE NO UNDOCUMENTED DEMOCRATS.”

It was spray-painted on the front of the Army Reserve Center, which recently became embroiled in controversy when the Obama administration considered using the facility to house immigrant children caught crossing the US-Mexico border illegally.

The Carroll County Board of Commissioners spoke out against the federal government’s plan on Friday during an emergency cabinet meeting. Commissioners attending the meeting pledged not to provide any assistance to federal agencies if or when they moved the children to the facility. […]

McCrory said the graffiti was being considered a hate crime because of its racial message.

Or is McCrory showing his own racism by assuming all the “illeagles” would be the same race?

Sounds like McCrory is due for some sensitivity training.