Sometimes evil people do things that make the mind spin to find some sort of explanation. A two year-old East Moline, Illinois child was cut by razor blades glued to playground equipment in a local park, the razors were glued on the jungle gym and playground poles.[1] 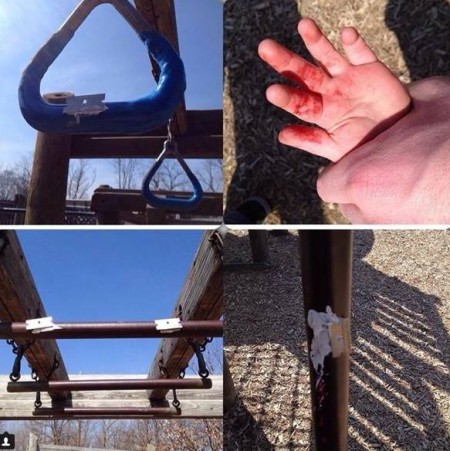 Janey Marie [3]has more on Facebook: My friend’s poor baby boy (2 1/2) was hurt at the park after he unknowingly held onto a razor that was plastered onto the playground by some twisted-sick person. Thankfully he is okay but I wanted to put this out there since she has given me permission.

What a disgusting crime.
The Quad City Times[4] reported:

A 2-year-old child was injured Monday when the child was cut by razor blades that had been glued to playground equipment in an East Moline park, police said.

“We have no reason to believe there are any razor blades at any of the other parks,” East Moline Police Lt. Brian Foltz said. “This is a safety precaution.”

Police responded to Millennium Park at 12:45 p.m. after getting a report about the razor blades.

Foltz said police weren’t sure how long they were there. He also had no information on a possible suspect or suspects.

“This is just being discovered today,” Foltz said.

Police found the razor blades glued to various pieces of playground equipment, Capt. John Reynolds said in a news release. The officers removed the blades and collected other evidence, he said.

As a parent I would never have thought of checking the playground equipment for razor blades. These people ruined Halloween candy… now they’re ruining playgrounds. I hope someone finds them fast so they can be ruined in prison!