How to end the class warfare argument 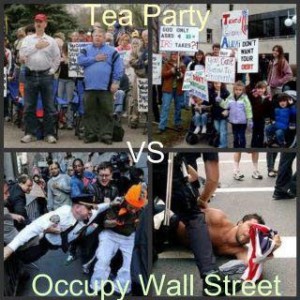 When Americans are divided by class and are pitted against one another for political gain it tears our nation apart. The us versus them mentality that the Democrats have instilled in a large portion of this great country is troubling. All you ever hear from the left is envy, contempt, and division. The Democrats have perfected the use of the class warfare argument and have systematically driven a deep wedge into the hearts of many Americans.

This article will compare and contrast The Occupy Wall Street Movement to that of The Tea Party. Additionally, it will examine the infamous one percent versus the 99 percent and touch on the reality of who pays what in taxes. Finally, it will provide solutions and suggestions on how to eliminate the class warfare argument once and for all.

Let’s look at the Occupy Wall Street movement. The definition of occupy in a military sense is to take possession or control of a person, place, or territory through force. Occupy Wall Street was founded on the class warfare argument. Although this group first originated from an idea in Canada; it came to fruition here in America in 2011. The Occupy Movement believes in the radical redistribution of wealth and blames America’s failures on unbridled capitalism and perceived corporate greed.

According to Democratic Pollster Doug Shoen, the group’s main goal is to intensely regulate the private sector by eliminating big banks, investment firms, and big corporations. They have set up camps inside of parks, disrupted traffic in busy cities, and even blocked entrances to businesses causing chaos and commotion.

A Fordham University study found that the Occupy crowd tended to be younger and much more radical. It is mainly comprised of younger students, the disenfranchised youth, low income workers and skilled laborers, and older recently laid off corporate executives. The average age of their members is only 33 years old. The study shows the make up of the group as: 2% Republican, 25% Democrat, 11% Green Party, and 11% admitted Socialists. The other 51% had no party affiliation.

Occupy Wall Street protestors say their message is non violent and that their goal is to bring about change through civil discourse and civil disobedience. Their actions however do not match their rhetoric. According to the New York City Police Department’s records on crime statistics their members have been arrested numerous times and for different reasons. Those reasons include minor offenses such as: littering, disturbing the peace, and trespassing on private property.

Many Occupy protestors have also been arrested for more serious crimes as well. These arrests include: public intoxication, possession of drugs and controlled substances, destruction of private property, urinating in public, defecating in public, attempted rape, sodomy, aggravated assault, manslaughter, and even murder. This group is the antithesis of civil discourse and peaceful demonstration.

Now let’s look at The Tea Party. The Tea Party is the exact opposite of Occupy Wall Street. The original Tea Party was founded on an act of defiance as well. On December 16th, 1773 a group of colonists known as the Sons of Liberty decided to revolt against the repressive taxes of the British Government. To show their discontent they decided to dump numerous cargo ships of tea into the Boston Harbor. The modern day version of The Tea Party also fights against oppressive regulation and repressive taxes. The acronym for The Tea Party actually means Taxed Enough Already.

The Tea Party believes in limiting the size of government, reducing spending, and lowering taxes. They also want our lawmakers to adhere to a strict following of our constitution. They believe like most Americans that our federal deficit is out of control and the size of our government is way too big.

The Tea Party’s beliefs are also more in line with most Americans. According to a CBS News survey Tea Party members tend be a little older and a lot less radical. The average age of a Tea Party member is 46 years of age. They are typically higher income earners, possess a higher level of education, and have well established careers or private businesses. They tend to have children and grandchildren and are retired or near retirement age. They are to the left wing media’s surprise not all Republicans either. According to the CBS study 54% were Republicans, 41% were Independents, and 5% were Democrats.

Unlike the Occupy Movement, The Tea Party has remained relevant. They are more organized, disciplined, and influential than their counterparts. While Occupy miscreants are busy defecating in the park, smoking their peace pipes, and singing kumbaya; Tea Party members are running for Congress, beating establishment candidates, and winning elections.

Is the class warfare argument based in facts? Do the poor pay more of the taxes? Should the rich pay a higher share?

According to the Office of Tax Analysis, the top 5% of income earners pay 54% of all individual income taxes, but constitute for only 30% of the income. The infamous top 1% pays 34% of all taxes. Since 1990, this group’s tax share has grown faster than their income share.

How can this be?

According to our Treasury Department the reason this is happening is due to the George W. Bush era tax cuts. Those tax cuts shifted a larger share of the individual income taxes paid to higher income taxpayers. George W. Bush’s tax cuts actually helped the poor and the middle class by lessening, and in some cases eliminating altogether the tax burden on the majority of Americans. It can’t be! George W Bush and the evil Republicans actually helped the middle class and the poor?

According to The United States Small Business Association there are an estimated 27 million small businesses in America. These small businesses represent over 90% of employer firms. They also employ by most estimation well over 50% of private sector jobs, excluding agricultural and farm jobs. The heartbeat, pulse, and engine of this great country are in America’s small businesses. According to the USBA, 65% of all net new jobs were created by small business owners since 1995. Raising taxes on job creators doesn’t create more jobs, it eliminates them.

This is a 6th grade math equation folks. If you lower taxes on small businesses they can hire more workers. As a result less people will be unemployed and in turn more people will be paying taxes. This expands the economy and increases the tax base which liberals should feel good about. If you raise taxes on small businesses they can not hire as many people. This leads to higher unemployment and in turn a smaller economy as well as a much smaller tax base. If liberals want more people to pay taxes don’t you think it would be better to have more people working to increase the size of the tax base?

The truth is Democrats don’t want more tax payers. They want more dependents. The more people dependant on the government, the larger their voting bloc becomes. That is why Democrats and The President supports groups like Occupy Wall Street and oppose others like The Tea Party.

So how do we defeat the class warfare argument?

We defeat the class warfare argument by changing the tax code. According to Answer.com the number of pages in the Internal Revenue Service’s tax code is 71,684. Most Americans find it complicated and confusing. Many believe the tax code was created to intentionally cause confusion. There are so many loopholes in the current system an acrobat couldn’t swing through all of them in their lifetime. It is a system in need of major change.

Most Americans want a more simplistic tax code and dread having to file their taxes. The anxiety most Americans feel when they have to file their taxes is equivalent to the anxiety one feels when they have to go to the dentist or the doctor. The complexity of the forms, the fees associated with filing, and the fear of being audited by the Federal Government all lead to feelings of fear and frustration.

Class warfare is embedded in tax policy. If we change the policy we can eliminate the argument. There are many different suggestions on how to change our complex tax policy; however for the sake of length of this article I will only touch on three.

First is the Fair Tax. The Fair Tax, or The Consumption Tax would eliminate all taxes and create a 23% tax rate on consumption of all goods and services. It would eliminate income taxes, estate taxes, capitol gain taxes, social security taxes, taxes on Medicare, and corporate taxes.

According to Fairtax.org the income tax bracket most people fall into is 15%. All wage earners pay 7.65% of their income in payroll taxes. If you ad those two numbers up you get roughly 23%. Everyone would pay the same amount of taxes on what they consume not on what they earn. Since you would now get to keep more of your money the 23% consumption rate is effectively closer to 15%. The Fair Tax doesn’t hurt the poor any more than it helps the rich; and it doesn’t hurt the rich anymore than it helps the poor; thus ending the class warfare argument.

The next suggestion is known as The Flat Tax. The Flat Tax simplifies the current tax code because it eliminates all deductions. It also places a one size fits all tax rate on everything. Everyone would pay the same tax rate regardless of income; thus ending the class warfare argument. The Flat Tax would only apply to earned income, not capitol gains, dividends, investments, and interest. The fact of the matter is that Colorado, Illinois, Indiana, Massachusetts, Michigan, Pennsylvania, and Utah already use some form of a flat tax in their respective states.

According to an August 28th 2012 Rasmussen Poll, 43% of people said they would vote for a candidate who would tax only the rich; while 41% would choose the candidate who didn’t raise taxes on anybody. Another 16% were not sure. That is a disturbing number of people who buy into the class warfare argument. The good news is almost as many Americans do not. That means this is an argument conservatives can win.