Let me say this to Karl Rove and the rest of the sniveling GOP establishment.:  The base of the Party loves Ted Cruz and hates the D.C. RINOs which include Rove.:

It’s the GOP establishment that’s abandoning their conservative principles IF they ever had them at all.:  We the base is tired with a feckless GOP Party that doesn’t have the guts or the cajones to put up a vigorous fight against the Democrats.:

We are sick of a Party that’s dying to become a Pro-Gay/Pro-Abortion Party or in other words Democrtat-lite.:

Lord if there was viable 3rd Party conservatives would leave this piece of crap GOP Party in droves!:  So if these lame poor excuses for men in the GOP think their doing themselves any favors crucifying Ted Cruz, they are very much mistaken.:

Mediaite[1] reports Fox News Sunday host Chris Wallace said Sunday morning that he’d received opposition research from other Republicans about Senator Ted Cruz (R-TX) in advance of Cruz’s appearance this morning[2], a serious indication of how upset the GOP is[3] with the Senator leading the risky charge to defund ObamaCare. 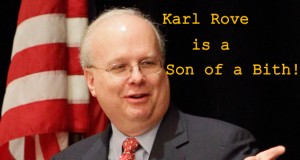 [4]“This has been one of the strangest weeks I’ve ever had in Washington,” Wallace said. “As soon as we listed Ted Cruz as our featured guest this week, I got unsolicited research and questions, not from Democrats but from top Republicans, to hammer Cruz.”

“This was a strategy laid out by Mike Lee (R-UT) and Ted Cruz without any consultation with their colleagues,” said Karl Rove. “With all due respect to my junior Senator from Texas, I suspect this is the first time that the end game was described to any Republican Senator. They had to tune in to listen to you to find out what Ted’s next step was in the strategy.”

: “You cannot build a Congressional majority, in either party, for any kind of action, unless you are treating your colleagues with some certain amount of respect, and saying, ‘Hey, what do you think of my idea?’” Rove said. “Instead they have dictated to their colleagues through the media, and through public statements, and not consulted them about this strategy at all.”

I bet it was Karl Rove himself or somebody close to him that gave Wallace the opposition research on Cruz. Karl Rove is a son of a bitch and I don’t trust his big government t loving ass!