Illinois Bill Forcing Schools To Teach The Greatness Of Unions

Because members of a union who have a long career that depends on supporting a union are the best people to teach the greatness of unions curriculum based on a bill that was pushed by a politician whose campaign is financially supported by unions. Can you say indoctrination?[1] 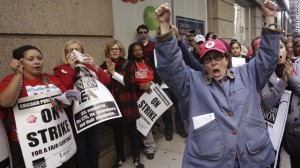 In January, a bill was introduced in the Illinois state legislature that would require schools to teach kids all about the marvels of unions. Senate Bill 2682 was introduced by the 19th District’s Michael E. Hastings, a south suburban Chicago state senator, and would require the “study of the history of organized labor in America and the collective bargaining process” to be included in US history classes.

The new law would state that, “The teaching of history also shall include a study of the history of organized labor in America, the role of labor unions and their interaction with government in achieving the goals of a mixed free enterprise system, and the collective bargaining process.”

The Illinois Policy Institute’s Justin Hegy finds the conflict of interest to be a bit too much.

“Our students are presented with a government-run education system–managed by government workers who are themselves heavily unionized–which mandates a curriculum that glorifies the role of unions. Conflict of interest, anyone?” Hegy wrote.

Meanwhile, it is unions that have been driving the Land of Lincoln into bankruptcy with the overly generous retirement benefits that public employees routinely get in the state. Naturally, Senator Hastings has been the lucky recipient of some $30,000 in labor union donations to his election campaign. Illinois is not the only state to find unionized teachers using tax dollars to indoctrinate a captive audience in government-supported schools with pro-union propaganda. Teachers in L.A. have been urged by a Common-Core aligned teachers guide to teach third graders about a 1985 janitor’s union strike as a lesson in “rights and responsibilities.”

The Chicago Teachers Union has also been quite interested in promulgating unionism in order to teach children “social” skills. In 2012 the CTU helped sponsor a socialist program for teachers to learn about “social justice” and in 2013 an active member of the CTU appeared at a rally in downtown Chicago to urge violent revolution unless the city bows to the CTU’s demands.

Looks like Illinois will be pumping out even more progressive adults in their system at a faster rate than before with the help of the PS system. My question, how long will the top heaviness of public unions leech off the economy of Illinois before the people realize what’s happened to their jobs and small business?