This needs to happen more often[1]: 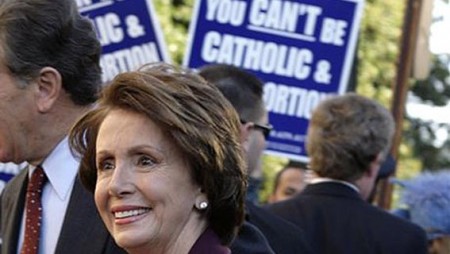 Bishop Thomas J. Paprocki of Springfield, Illinois, known for his outspoken defense of the right to life and the natural family, has signaled his support for denying Communion to Catholic politicians who publicly endorse activities gravely contrary to the moral law.

The bishop wrote recently to a pro-life activist to affirm that he is upholding a diocesan priest’s decision to deny Communion to U.S. Sen. Dick Durbin, D-IL, who has a 100% rating from NARAL Pro-Choice America and Planned Parenthood.

The reason is pretty simple:

“Senator Durbin was informed several years ago by his pastor at Blessed Sacrament Parish here in Springfield that he was not permitted to receive Holy Communion per canon 915 of the Code of Canon Law,” Paprocki wrote. “My predecessor upheld that decision and it remains in effect. It is my understanding that the senator is complying with that decision here in the Diocese of Springfield in Illinois.”

Canon 915[3] states that those who are “obstinately persevering in manifest grave sin are not to be admitted to Holy Communion.”

In placing the onus on ministers of Holy Communion, canon 915 is distinct from canon 916, which places the onus on the communicant to not approach for Communion if they are “conscious of grave sin.”

Recently, a British bishop explained[4] to one of my bosses at LifeSiteNews.com that rather than a punishment, the denial of Communion is “always an act of mercy”:

Bishop Egan explained that rather than a punitive measure, the denial of Holy Communion is “always an act of mercy.”:  It is done, he said, “with the hope and prayer that that person can be wooed back into full communion with the Church.”

“Nobody is forced to be Catholic. We’re called by Christ and He’s chosen us, it’s a free choice. We live under the word of God. It’s not my truth, its God’s truth,” he said.

“One would hope that in that case it would encourage someone to come back to seek communion with the Lord with the truth and say I’m sorry I got lost.”

Next on the list should be Vice President Joe Biden and House Minority Leader Nancy Pelosi (D-CA). Not only do these people oppose a core faith and moral teaching of the Church, but they do so publicly, and thus cause scandal to the Church and harm to people who listen to them because of their positions of power.

ALSO SEE:
Why Does God Allow Bad Things To Happen To Good People?[5]