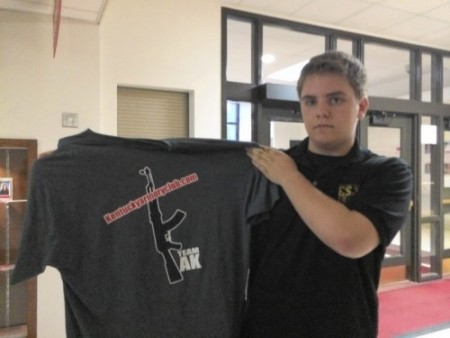 A Hinsdale Central High School student is challenging a suspension he said he received for wearing a T-shirt that depicts an AK-47 to school.

Senior Chris Borg, 18, of Hinsdale, appeared before the Hinsdale Township High School District 86 school board Monday to make the request that the suspension he received on May 6 be removed from his record.

Borg told the board that he wore a T-shirt with the outline of an AK-47 depicted on the back, a url for the website of a Kentucky armory club that supports gun rights and the words “TeamAK” on it. He said the shirt did not identify the gun as an AK-47 in writing. Borg said he was stopped for wearing it by hall monitors. He said the dean of students, Kimberly Dever, offered him the chance to turn the shirt inside out, wear another shirt or be suspended for the day.

“I decided to go home for the day because I felt it was a infringement of my First Amendment right to freedom of expression,” Borg told the board.

Supt. Bruce Law said the T-shirt is a violation of the dress code outlined in the school’s handbook.

The handbook states that students are subject to disciplinary action when they wear clothing that “is deemed vulgar, inappropriate, unsafe or disruptive to the educational process (e.g., advertising/display of alcohol, drugs, tobacco, sexual innuendo).

Borg said he was told the T-shirt was unsafe and disruptive. […]

Borg’s father, Kevin Borg, said he supports his son’s quest to have the suspension expunged.

Kevin Borg said if he’d known his son was going to wear the T-shirt to school he probably would have suggested that he not wear it.

The t-shirt wasn’t “unsafe” or “disruptive” until the school made it so. Weasel Zippers[3] is right. This is just another example of what “zero tolerance insanity.”