In majority of states, welfare pays more than minimum wage

…In some cases, 2 to 3 times more. That’s right: in 35 states, you can make more money sitting at home collecting welfare than working a minimum-wage job. 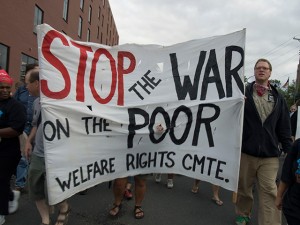 According to Mr. Conservative[2],

The study goes to prove that Obama’s handouts are generating a society that–out of common sense–would rather sit at home and wait for their check than actually go and work for less.

This all comes at the times where U.S. citizens and politicians are continually arguing in effort to raise the minimum wage.:  Claiming that they don’t get paid enough for the work they do let alone live, several workers have taken to going on strike.

Of course, they’re claiming they would need $15 an hour to flip burgers, but you can understand their frustration.:  When you don’t get paid enough to live off of and would, in fact get paid more to stay home since Obama has done away with Welfare reform, who wouldn’t be frustrated?

Indeed–who would bother putting in the hours at a tedious and/or physically exhausting low-wage job when it pays less: than doing nothing?

Also see: 15 Reasons Why Barack Obama Is the Greatest President In American History![3]