Those who may have been distracted by tax day & all the associated festivities, may have lost track of the other meaningful bits of this particular time of year. It’s mid-spring now, which means people who recoil in horror, for some reason, at the sight of a nice-looking girl in a swimsuit, have now had about six months of bliss. They haven’t had to experience the agony of seeing that anywhere, for all this time, and they’ve now gotten it in their heads that not seeing nice looking girls in bikinis is some kind of a “universal human right” or something. This has become a seasonal thing over the past few years, I see. Some nice looking girl has a picture taken of herself in a bikini[3] right about this time, and finds herself in a mess of trouble over it which nobody — and I do mean nobody, and that includes the troublemakers — can coherently explain. 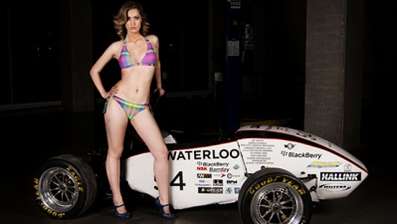 The University of Waterloo in Canada has suspended a team of students who built a racecar after a female member was photographed posing next to the car in a bikini and high heels.

University spokesman Michael Strickland said the temporary suspension is in response to an “inappropriate and denigrating” photograph that appeared online, as well as in Tuesday’s edition of the Waterloo Region Record.

“The decision also considered the guidelines in place to ensure the safety of students,” Strickland wrote in an email to FoxNews.com. “The university’s engineering design centre, where the photo was taken, has rules covering the type of equipment that can be brought in as well as the manner in which it can be used.”

Mmmm, hmmm, “safety.” Yeah. Lady in a swimsuit might get someone hurt. Can’t have that!

Bet if it was a male student, and they took the car into the local gay pride parade and did obscene things with it, the university would hail the display as a shining example of the university’s values.

Further evidence there is a schism taking place between two kinds of people who simply can’t live together, and that a really tall fence needs to be built or else someone — one side or the other — has to get banished to an island.

I’m rapidly approaching the point where if the island option is chosen, I don’t care that much which side is subject to the banishing. I’ll miss Trader Joe’s, but let’s face it, even within three miles of the closest one I don’t go there that often. Of course I don’t go to Hooters that often either. Both of them cost like crazy.

Just build the damn fence and be done with it. Yeah, I find chaw tobacco as disgusting as anybody else, but I can live with people who chew it. I can’t live so easily around people who have problems with pretty ladies. Especially if they are so used to saying nonsensical things that they start to wax lyrically about the safety hazards involved with bathing suits…that’s pretty far afield of the reality I know & understand.

Cross-posted at House of Eratosthenes[4] and Washington Rebel[5].