Is that Putin laughing? John Kerry gives Russia a Monday deadline to reverse course in the Ukraine

Crimea is now part of Russia because they took it by a show of force without firing a shot.:  Unless the United States and the European Union are willing to “physically” make Russia leave, all the speeches of outrage won’t accomplish a damn thing other than making these countries look impudent, which is exactly what they are.:

And Russia’s, China’s, Iran, and North Korea’s expansion will only move forward.: 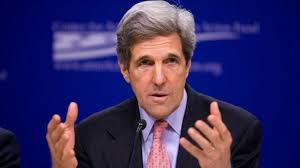 [1]Washington Examiner[2] reports Secretary of State John Kerry[3] warned of serious repercussions for Russia[4] on Monday if last-ditch talks over the weekend to resolve the crisis in Ukraine[5] failed to persuade Moscow to soften its stance.

U.S. and European[7] officials argue that Moscow is orchestrating the referendum and waging an intimidation campaign with thousands of Russian troops controlling the region. If Russian-backed lawmakers in Crimea go through with the Sunday referendum, Kerry said the U.S. and its European allies will not recognize it as legitimate under international law.

The U.S. and Europe on Monday would then unite to impose sanctions on Russia, Kerry told a Senate[8] Appropriations subcommittee Thursday during a hearing on the State Department’s[9] budget.

“There will be a response of some kind to the referendum itself,” Kerry said. “If there is no sign [from Russia] of any capacity to respond to this issue … there will be a very serious series of steps on Monday.”

Originally posteds at The Last Tradition[11]