Issue not Income Inequality, but Income-Period!

: President Obama is drowning in a sea of discontent.:  Poor guy can’t seem to get his message across that things aren’t so bad after all if only people 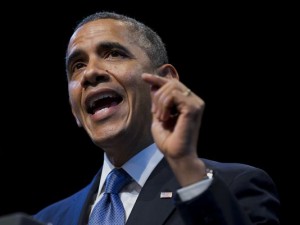 [1]would stop watching Fox news or listening to Rush Limbaugh.:

Sorry Mr. President but 93 million American don’t have a job[2].:  That’s a stunning statistic that’s a first in U.S. history.:  The reason this country is in the woeful economic shape it’s in is sitting behind his desk at 1600 Pennsylvania Avenue.:  That is if he’s not playing his 161 round of golf[3].:

It’s Obama’s economic policies, or lack thereof that’s killing jobs.:  Oh, he’s had job summit at the White House but those are merely photo ops for the media.:  Bottom line, Obama doesn’t know how to create a job and none of his top advisors do either because they’re all academics straight off the faulty lounges at Harvard or Yale.:  These people don’t know the real world and the results we’ve seen for the past six years are an indictment of their economic ignorance.:

What Obama and his inept cohorts know how to do is theorize.:  And their latest theorization for what’s plaguing the country is, wait for it, income inequality.:  But, this is nothing more than a Harvard plated bait and switch.:  Yes, incomes are unequal and they are supposed to be.:  Doctors are supposed to make more money than burger flippers.:  The key question is how does one become the doctor instead of the burger flipper?

The answer to the question is obvious but don’t expect President Obama to really address it.:  He instead will shake shinny toys and talk about how the incomes of the rich are so much greater than the poor and government is needed to fix it (see wealth redistribution).:  He’ll offer a false Utopia and he single out the 1% as the culprits for us not getting there.:

It’s all snake oil that absolves him from the conditions he created in the first place.:  The best anti-poverty program is a job.:

But, Democrats derive their power from more people not working and that’s the dirty little secret that needs to get know pretty quick before Obama pisses on all our heads and calls it rain.: : :

Originally posted at The Last Tradition:  :  [4]