Ivy League lawyer, 35, sobs after getting life after brutally murdering his girlfriend

In my life, I have driven 3 women to women’s shelters or to be picked up by a women’s shelter worker. The stories are sad but I’m always relieved when they finally make the decision to leave a violent partner. On average, more than three women are murdered by their husbands or partners in this country every day. An Ivy League lawyer convicted of beating and strangling his girlfriend to death in their Queens apartment has been sentenced to life without parole, a judge ruled Tuesday.[1] 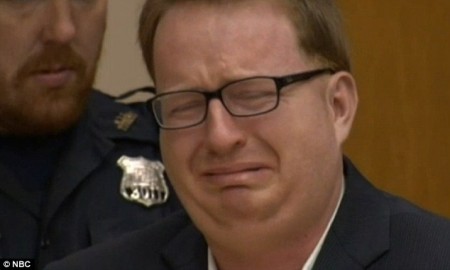 Jason Bohn, 35, was found guilty last month of first-degree murder in the brutal June 2012 slaying of Danielle Thomas, a financial analyst for Weight Watchers who was killed in the Astoria home she shared with Bohn. She died of neck compression and blunt-force trauma, had lacerations on her face, mouth and chest and was found lying in a bath full of ice. Before the sentence was handed down, the court heard from Thomas’ family, with the words of her grandmother, Juanita Hardgrove, causing Bohn to break down in tears, The New York Post reported.
‘I’m a cancer survivor, and I thought that hearing I had cancer would be the worse news until I got that call that you murdered my precious Dani,’ Hardgrove said.

‘We couldn’t even see her face in the casket to say goodbye because of what you did to her body but her spirit will last with us always.’

Weeks prior to her death, Thomas told police Bohn had beaten her a month earlier, leaving her on crutches and with two black eyes, NBC New York reported. He called her cellphone while she was at the police station and Thomas put it on speaker, allowing detectives to hear Bohn threaten to bash her skull in and ‘hunt her down like a dog’.
Bohn was arrested that day and Thomas was granted an order of protection.

One of the most compelling pieces of evidence an unintentional voicemail, wherein Thomas could be heard saying ‘I can’t breathe’ as Bohn strangled her. On the chilling recording, a man believed to be Bohn relentlessly questions why Thomas made a phone call to a number with a 508 area code. Bohn is then heard strangling the 27-year-old before letting go as she pleads with him and tries to answer his questions, DNAinfo New York reported. She struggles to breath as she answers over and over: ‘I don’t know… Jason, I love you.’

He then replies: ‘I’m going to let you up and then you need to answer quickly or else you die… Danielle, why did you call that number?

‘Danielle you are so stupid. You think I’m going to stop, I won’t stop.’

He didn’t stop. Bohn is now expected to die in prison. Danielle made the wrong decision to trade her life for a dangerous love. Please send this story to your friends in dangerous relationships. If they have been hit once by their partner… they are in a dangerous relationship. The National Domestic Violence Hotline [3] page has a popup warning: ‘Computer use can be monitored and is impossible to completely clear. If you are afraid your internet usage might be monitored call: 1-800-799-7233’ Chilling…Don’t wait, get help NOW!