Jeb Bush: Illegally Entering The U.S. Not A Crime It’s “An Act Of Love” [VIDEO]

If you ever had a bad feeling about Jeb Bush running for President but couldn’t put your finger on the ‘why’ beyond he’s an idiot, here’s one for you. Jeb Bush does not understand the purpose of having secure borders (one of the few responsibilities given to federal government in the Constitution) thus he would not know how to be President. Jeb’s opinion is illegals sneaking across the border isn’t a felony so it should be forgiven.[1] 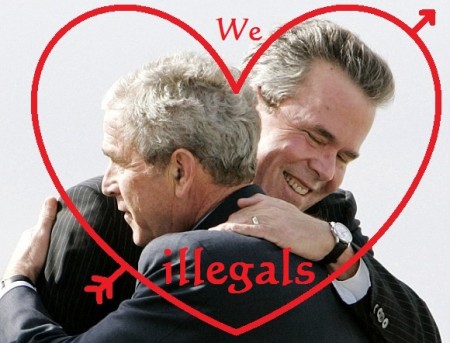 “I’m going to say this and it will be on tape, and so be it. The way I look at this is someone who comes to our country because they couldn’t come legally, they come to our country because their family’s dad who loves their children was worried that their children didn’t have food on the table, and they wanted to make sure their family was intact. And they crossed the border because they had no other means to work to be able to provide for their family. Yes, they broke the law, but it’s not a felony. it’s kind of — it’s a — it’s an act of love. It’s an act of commitment to your family. I honestly think that’s a different kind of crime that should be, there should be a price paid, but it shouldn’t be — it shouldn’t rile people up that people are actually coming to this country to provide for their families. And the idea that we’re not going to fix this but with with comprehensive reform ends up trapping these people, when they could make a great contribution for their own their families but also for us.

So I think we need to get beyond the harsh political rhetoric to a better place. The great number of people who come to this country come because they have no opportunities in other places. They may love their country, but they come here because they want to provide for their families. And they can make a contribution to our country if we actually organized ourselves in a better way.”

This elitist idea that people can’t take care of themselves and that the wealthy country USA should provide for the world is a total Bush ideal. It’s also an Obama ideal. We do not need leaders who destroy the natural survival instincts of achievement by bending laws to appease their personal guilt of success. America was built off of hardship. Let other countries build themselves off of their own hardships as well.