Jeremy Brent Cramer, the man who murdered his 3-year-old in a Montana field after his wife threatened to leave him, will spend the rest of his life in prison[1]. 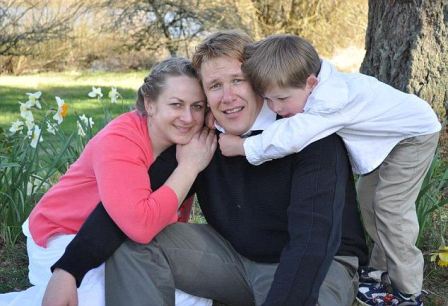 The killer’s ex-wife, Nataliya, called Cramer an “animal,” but I think even that gives him too much credit. I’d go with “the scum of the Earth.”

A Washington man who pleaded guilty last year to butchering his three-year-old son to death because his wife was threatening to leave him will spend the rest of his life behind bars.
Jeremy Brent Cramer, 38, was sentenced Friday in district court in Dillon, Montana, to life for the grisly killing and dismembering of his young son Broderick Cramer last summer only two days before the boy’s fourth birthday.

On July 8, Cramer took Broderick to a remote field outside Anconda, Montana, and killed him following an argument with his wife, Nataliya.

‘We’re dealing with … the gruesome, horrible, dismembered butchery of a child. Your child. It’s almost impossible to fathom the gravity of that crime,’ said the judge.

Officials said Cramer’s son died after being struck in the head with a rock, but that was only the beginning of the man’s rampage.

He then took a large knife and cut the boy’s throat so badly he nearly severed his head clean off his shoulders, a parole officer described to the horrified court room.

Investigators found the boy’s heart nearby, his organs had been removed, lead investigator John Sullivan told jurors. The child’s body was cut in two, with both halves found near to each other, he added.

Cramer then made is way to a gas station to wash his own son’s blood off his clothes, witnesses told police. The boy’s remains were found the next day.

Cramer originally pleaded not guilty because he was facing the death penalty, then changed his plea when execution was off the table. So much for the liberal talking point about how “the death penalty is not a deterrent.” It turns out that even the most depraved killers fear being executed for their crimes.

Also see: Why Does God Allow Bad Things to Happen to Good People? [3]